An offering from a "paranoid lunatic" 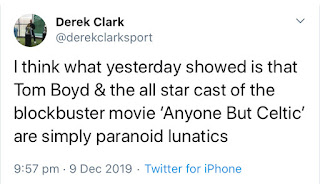 Pretty much any time referees become a hot topic in Scottish football, the second film I did gets a mention and I get some new torrents of abuse and support. Of course, I think you know ABC was about much more than who gets penalties and so on so I am going to get to the core of the matter right now.

A lot of people in Scotland hate it when Celtic supporters stand up for their own.

What these people, The People, would like is if we all bent at the knee, lay down and spoke when spoken to. If you want that, go see the Celtic Board, not folk like me.

The thing that is sticking in the Sevco craw is, and is yet more proof of the new club status, is all the old advantages have gone bar one, the honest mistakes, and when that doesn't happen the toys come out the pram. Jullien was offside, yes, a fraction, still offside but a lot harder to judge than pundits would care to admit. What seems to get lost is they got a penalty almost immediately, which was a penalty, then a man advantage, which was absolutely ridiculous.

The days of inexhaustible overdrafts, bank support of a billion pounds, Tax schemes that allowed top wages to be paid and a laptop loyal being able to print lies with impunity died with the Oldco.

Folk like me (and there are many of us) won't bend at the knee, lie down or shut up. If that contributes to Celtic's continuing success, brilliant.

And if it doesn't? Well, it's annoying the right people.
Posted by Paul Larkin at 3:18 AM