When history was made 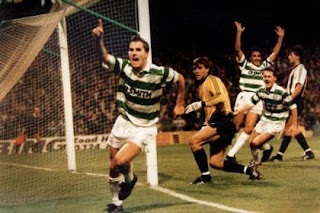 Tuesday night was probably the most surreal game I've seen at Celtic Park since the Partizan Belgrade game 30 years ago. Back then, the club was falling apart but most of us were too blind to see. I distinctly remember Not The View being one of the few places that was saying things were going badly wrong behind the scenes and something would have to be done. It took a long time before the fans, as a collective, did something about the abyss Celtic were heading to but the rumblings started around September 1989 when we were knocked out of Europe and the league cup in a matter of weeks.


They would go on for five years until things finally got better.


It's not really a comparison in today's terms but I did think of Jacki as I watched Edouard score one and set up two on Tuesday. He, like Jacki, walked off a beaten man and must have wondered why. Defensively, just like 30 years ago, we were an absolute shambles. The warm up saw just three defenders do it in front of the fans in the usual corner and I'm still not convinced that McGregor was initially going to play left back in the traditional sense. Quite frankly, to line up as we did against a team who like to bypass the midfield was utterly mind-boggling. Cluj probably could not believe their luck especially when we essentially gifted them four goals.


What worries me most is a performance like this has been coming. Bolingoli has failed to convince so far and Julien looked like he had a sack of tatties on his back on Saturday at Fir Park. It's very early but it's clear the manager, who didn't sign either, doesn't trust either. Add in that Scott Bain has been wobbling for months now, you have to wonder what exactly is the recruitment process at Celtic. Bolingoli was recommended by Shaun Maloney whereas Julien was recommended to John Kennedy. Anyone within the club will tell you that, since Brendan Rodgers left, Kennedy's power and say has increased immensely.


What of the manager? I made no bones about it at the time that whilst I love the guy, I did not want him back. The timing of his announcement was amateur hour and designed to eek out the news at a time when most of us were ordering another treble.


As for the top of the club, I've pretty much said all I need to throughout the years. The debate around Peter Lawwell has become more entrenched than the Brexit debate and the only thing that seems consistent around it for me is whenever I criticise him on Twitter, accounts appear slagging me personally and it gets ridiculous.


Despite winning the last nine trophies, I think the club has been adrift since at least the time Brendan Rodgers walked out (Something that, to this day, the fans blame him entirely for and, whilst he's not blameless, I'm positive fans will realise there is a lot more to that story in due course) and there is, as usual, no long-term plan. Our scouting network is an absolute shambles, our temporary director of football has made little positive impact and we have gone back to the pre-Rodgers days of non-football men having a huge say on who we sign.


If there is one thing Celtic excel at it's not building from positions of strength. 18 months before Partizan Belgrade, we completed a Centenary double and spoke about the history we made.


I sincerely hope that, 18 months from now, we are still making history.
Posted by Paul Larkin at 10:33 PM