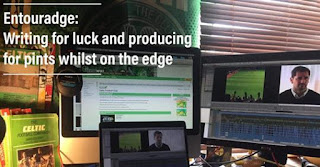 Why a memoir? Well, it's not to make money that's for sure. I know these kind of things sell fuckall but it's a cathartic process for me to get all this stuff out my head, try to sustain good mental health and, maybe, inspire another Gadgie like me to write a book or make a film.

What I am writing about are the three books I've written that got turned into documentaries and everything that happened around that period in my life. I need to do it to try to move on from the traumatic stuff that happened (although I've put all that in one chapter as the abuse is not the main focus of the book)

A lot of good things did happen as well but, more importantly for me, I learned and matured a lot as well.

One of the main inspirations for the book was when @jimslaven said to me one day "The working classes should always write their own histories" That whirled around my head a lot and I thought that, as well as doing that, I could share some of the stuff I've learned in the book and film game trying to remind folk that these industries are not the property of the rich nor are they the property of the middle or upper classes either.

I'm also trying to entertain as best as I can so there are quite a few mad tales, that I've never shared publicly previously, in there as well.

This book will also act as a bridge to another project, far bigger, that I will announce on November 2nd.

Until then, if you want to pre-order the book and support me in this memoir project you can do so by clicking here and picking up a signed copy for yourself. It's £20 anywhere in the world and it's stuff like this that fuels the bigger stuff.

I'm going to share a lot of intimate stuff in this book but no one I know has anything to worry about, this is not any tabloidesque type pish to try and humiliate folk.

It's simply a working class Gadgie writing a little bit of history and appreciating every single person who wants to share it with him.
Posted by Paul Larkin at 12:30 PM No comments: