The SFA and appointments of appeasement 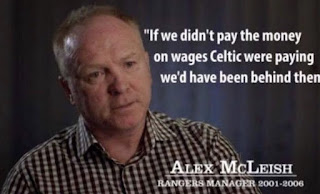 As Scottish football continues to bewilder and befuddle even the most tolerant of supporters, it's actually quite astonishing that some folk still think the SFA is fit for purpose. Ok, let's take them at their word for once. Michael O'Neill was their guy, he fitted their profile of the next Scotland manager. Ok, fair dos, proven track record, knows the game, lives in Scotland. Fine. We then get the 100 day clusterfuck from Stewart Regan (normally so adept at his job) and to absolutely no one's surprise, O'Neill goes all "Ulster" and says no. So from that, how do you get to Walter Smith and Alex McLeish?

Forget any notion that this was a committee decision, This was all Rod Petrie. Rod Petrie will be the next President of the SFA but already wields all the power. More of him later.

I spoke to someone who played for Scotland yesterday morning and we were laughing about who would be the "Token Tim" in the appointment but even we didn't think Peter Grant would come that quick.  McFadden, an SFA identikit after saying our titles were tainted without any huns in the league, is the crowd pleaser who comes with virtually no experience but is cheap.

Here's the rub about Alex McLeish: He got a 1.7m EBT and has been ordered by HMRC to pay back 850 grand. There was little chance of that happening until he got this job. He can't do what a few of them have done already, go bankrupt, because it is in his SFA contract that bankruptcy=termination.

Ah, Rod, the next Celtic-hater on the horizon. Be assured, he wants to stop Celtic. When Rangers were cheating, it looked to all the world like they had the same interests as us. Liquidation put paid to that. Now Newco has more in common with the other 10 top flight clubs and will vote accordingly, against us, guaranteeing the 11-1 vote needed in Scotland for change to certain things like gate receipts for example.

All of this is about absolute power.

And we all know what absolute power does.