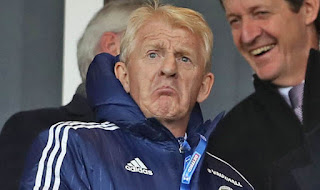 I've fallen out of love with international football for a while now. In a general sense, tournaments bore me by the quarter final stage, the faux nationalism annoys me and the widespread corruption by FIFA makes me think I am watching a Mafia court case when taking in certain games.

In terms of Scotland, I was done going to watch them by 1990. That was after going to see Scotland play Poland at Hampden and witnessing incessant abuse of two Polish players who just happened to play for Celtic. I've probably been to six Scotland games since then and the record is lost 5, won 1, with the solitary victory actually coming at Wembley. I think most people reading this will know my views on the SFA as an organisation and I know all about the discrimination and treatment of Celtic players in the past too. I also have absolutely nothing in common with anyone who chooses to go to a football match in a kilt.

With all that being said though, I still want Scotland the team to win when they play. I also went to the pub to watch both the last two Scotland games for the first time in yonks.

Recently on Twitter, I responded cheekily to a tweet by a girl who said something along the lines of "If I ever split up with my boyfriend, I'll never want anyone else" So you can imagine the type of reply and when she saw it she responded "Who hurt you?" My reply to that?

"Probably Gordon Strachan the most"

Now I have met Gordon Strachan loads of times. We grew up on the same street, his parents lived in the same house for years, he returned to my scheme on loads of occasions and I've attended loads of local events he was part of. I also met him a lot of times when he was at Celtic, both at the park and in the area when he would visit his dad at the local golf club.

When he became manager at Celtic, I was having a bad time with my health. I resolved to write a book about his first year at Celtic. Average Joe Miller did a brilliant book cover (Trainspotting type theme) and I even got Adrian Chiles to do the foreword (if you remember back then, he and Gordon were a double act on MOTD2) and off I went to games and press conferences reinvigorated after a health scare.

It was two months later that I completely abandoned the idea.

My thought was that I could write about his first season, throw in some old Muirhouse stories, and finish with the sort of cult book (no typo) that I would end up writing many more of in years to come. Thing was, I had no idea what Gordon Strachan was like at press conferences. I discovered really quickly that he was only interested in engaging with one journalist (Jim Black) and anyone else who asked him a question was always looked at as if they just asked to sleep with his wife.

Over the years at Celtic, it became so bad that by 2008 he used the same golfing analogy ("From tee to green we are fine, it's just the putting that needs work")  8 weeks in a row. Now, I know what you are thinking, I am glossing over his 3 leagues, 1 Scottish Cup and 1 League Cup at Celtic and you are right, they were great. As were some of the Champions League nights where the likes of Milan and Man Utd were beaten.

There are lots of other factors though and I don't just mean Artmedia.

His treatment of Chris Sutton, Alan Thompson, Jackie McNamara and Bobo Balde was a joke. He even blamed Jackie for that reverse in Bratislava despite the fact he had signed for Wolves a month previously.

His football was eye-bleeding at times and resulted in Celtic losing 10,000 season ticket holders whom the media branded bigots because they didn't like Gordon Strachan. I should say at this point, I am speaking for myself here, I know not everyone doesn't like him. I was taken to task on Twitter last week by a son of Tommy Burns for my views on Strachan and I know there is a side to Strachan that he will have seen that very few others do and I appreciate completely his friendship with Tommy. However, you cannot overlook the likes of his petty treatment of Aiden McGeady and the lengths he went to to get him out of Celtic. (Just look at all the "replacements" he signed never mind the singling out for constant abuse)

When Gordon took the Scotland job, I did think he was the man for the job. I know he loves coaching and developing players and the lack of week to week press conferences would definitely suit him. Yet, all the old traits came back and another generation was damned. The first campaign was awful. A victory over Ireland at Celtic Park should have made progress fairly straight-forward yet Scotland managed to finish fourth in the group.

At that point, a PR campaign was launched to keep him in the job. His comments had fallen in line with SFA top brass ("We need a strong Rangers") and he was given another crack. Reality being, he lost Scotland the group in the first four games. I don't say that lightly. This was a winnable group with a truly awful England side as top seed. Yet as Brendan Rodgers Celtic tore up Scottish football it seemed that the only one who wasn't watching was Gordon Strachan. Indeed, Griffiths only got a game when Strachan thought he was done for and then the likes of Armstrong and Forrest were suddenly thrown into a Scotland team that thought qualification was as likely as an SFA admittance of being wrong.

Suddenly Scotland were playing well.  Throw in the added bonus of John McGinn playing in the top flight again and Callum McGregor banging them in for Celtic and the future actually started to bright. So bright that Scotland put the play offs in their own hands. So what does he do? Goes back to a tired formation and picks his pals again. Even when the midfield is being overrun and Slovenia have equalised and looking likely to score again? He does nothing. With pacey, in-form players on the bench who can score goals regularly, he opts for none of them and the dream dies once again.

Thing is, I know Gordon Strachan won't give a shit about this blog. I am fan who never played the game professionally so my opinion doesn't count in his eyes. No, because he has the wealth of knowledge provided by Mark McGhee and Calum Davidson so why would us Kestrel drinking, devil dug owning monsters matter?

I don't see where Scotland go now. I fear he stays or, worse, Malky gets the job but whoever it is, just give us back our game, please, Mind you, as long as the SFA exist, I see nothing changing.
Posted by Paul Larkin at 3:58 AM No comments: