Lies, damned lies and The SFA 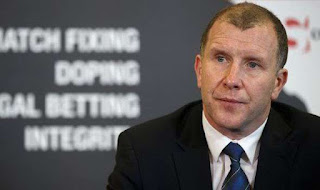 I've wanted to blog a few times this week but was stopped by those who slaughter "Bloggers" yet claim to hate the MSM. (Sarcasm, come on in) Right now we are getting to the heart of the battle to save Scottish football.

On one side there are the supporters who paid into a rigged game, Celtic FC, The SPFL Board(bar one dope) and a few people within the game who want an inquiry but fear the same treatment that Ally McCoist ensured Eric Drysdale and his family got back in 2012. There's also the sad reality that at least four clubs in the top flight of the SPFL live in hand to mouth and put money above pretty much everything (especially when it comes to spending it)

On the other side is The SFA, The MSM, Sevco, Fans of Rangers(IL) and Sevco, various bigots who run football clubs and all being led by Daryl Broadfoot (Not now officially employed by The SFA but on a retainer from The SFA) who has been tasked with firefighting this thing for The SFA (Probably should mention Chris McLaughlin here who, although banned from Ibrox and not paid by The SFA, is doing his level best to ensure there is no inquiry and is praying for a total whitewash and lifting of his ban from Ibrox)

Let's deal with this nonsense that fans are "sick of all this". You would only be sick of this if you had a vested interest in there not being transparency in Scottish football so who gives a flying fuck what they think? Propping up a corrupt game makes you as culpable as those who corrupt it every day so you can spare us the crocodile tears. I know it is irking certain parts of the media gravy train that this isn't going away but if they had done their job properly, we wouldn't be here now.

I've listened with interest as Daryl Broadfoot has attempted to build his profile again and wondered why? On a good earner from the SFA and part of his new PR company it may seem that he has played a blinder and to a certain extent he has but don't be fooled by his jokey demeanour on Sportsound. He is working every day to ensure no transparency in Scottish football.  And you can be damn sure he has a vested interested in that.

Stewart Regan is a man who just wants this drawn out as long as possible. Of course he is highly culpable in this sham but he is also acutely aware he is in a job with a salary and profile that he will never get anywhere else so the longer this goes on, the happier he is.

And what of Celtic? I've known for a long time that Celtic have been all over this. I've told people this when they have asked me and was usually met with scorn. I can understand the scepticism in the same way that I can understand Celtic not making every utterance public. Celtic, internally, can drive me mad at times but I've said it before and I'll say it again, Celtic want this as much as we all do. They play a long game and try to be measured (sometimes too much in my view) but ultimately the statement on Saturday was clear and concise as to the position.

The question is: So what now? Sadly, I've never believed any fan-led movement will bring the change we want in Scottish football. Because the only thing clubs would act on is a long boycott of their grounds and that's never going to happen. This has to come from within the game and I was delighted to see Celtic vocalise that. This is not a Celtic v Rangers (IL) thing though, This is a justice thing and a few folk would do well to remember that.