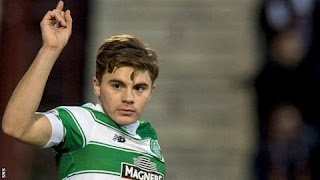 In a climate of continual chat about how you should support Celtic, it was nice to see two of the Boo-Bhoys silence their critics last night. James Forrest and Nir Bitton played massive parts in Celtic's progress into the Champions League play offs. Supporters know, every generation has players who get it in the neck from the fans more than most. In my lifetime I can remember Pierce O'Leary, Paul McGuigan, Derek Whyte, Mike Galloway and Peter Grant, to name but five, who all got it. None of these players were ever going trouble the Ballon D'or judges but all of them gave everything they had.

I was talking on @HomeBhoys on Tuesday about how when players got barracked in a game, this normally ensured greater support for them in the next game (Similarly I always remember fans being even more keen to go on a Saturday after a Wednesday defeat) Many moons ago, The Jungle used to chant the name of every player in the team before a game. It was routine. If I think about it, I can still hear it. Indeed, it was also how you knew the team back then (One Packie Bonner, there's only one Packie Bonner, One Chrissy Morris, Anton, Anton...)

Davie Provan, not brought up in the Celtic tradition, always spoke about how the affinity between the players and fans was what drove the team on (Why else do you think we go the reputation for last minute goals?)

In recent years, Calum McGregor was a target. Ronny Deila said it really affected his game as he got scared. Think about that, a Celtic player scared of his own fans. Nowadays, it's Forrest and Bitton. Some of the comments aimed at Forrest after the first leg against Rosenborg would have seen a ban from Follow Follow never mind be befitting of Celtic supporters whereas the collective gasp on Twitter when Bitton came on was akin to a vaping convention.

Bitton strolled through the game at centre half and Forrest scored a goal so good that it dropped Rob McLean's bitterness to a new level.

The moral of the story is, a lot of us forget, we aren't the coaching staff or judges on some sort of Football Factor, we are supporters and it is time a lot of us remembered that.

Or shut the fuck up.
Posted by Paul Larkin at 1:09 AM No comments: