A tale of two former politicians 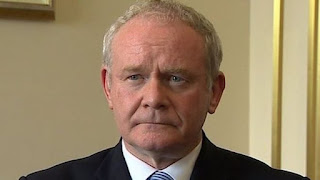 It was with great sadness this morning that I received the news of Martin McGuinness passing. I remember reading in a book in the early 90's that "No person was a greater threat to the British state" than Martin McGuinness. All the while he was paving the way for a peace process that could not have worked without his input. A lot of that included things that stuck in the throat of Republicans, none more so than meeting Elizabeth Windsor, but I always got the feeling that Sinn Fein were taking their lead from the A.N.C. handbook. I met him once. January 2000 at the Vol. Tom Williams re-burial in Belfast. What struck me more than most about him was how tall he was (I guess standing next to Gerry Adams for so long would make anyone look small) He put up with numerous threats over the years to keep the process going but always remained calm. The most remarkable feature of his life had to be his friendship with Ian Paisley. This led to one of the most remarkable things I've ever seen in Irish politics, Ian Paisley Jr thanking him for his contribution to Ireland and his friendship to his father. With that statement, I saw a dawn of light on the road to peace and eventual reunification and Martin McGuinness played an enormous role in that. 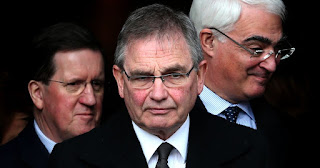 It was with utter dismay this morning that I read Brian Wilson label half of Scotland bigots. Accusing Nationalists of trying to "sectarianise Scottish politics"  The nonsensical rhetoric, spawned out of his hatred of the SNP, should be the end of his association with Celtic. I've watched Brian polarise on twitter for the last few years and cringed at the insults he has given out to fellow Celtic supporters. The fact that this man takes £25,000 a year out of Celtic both mystifies and angers me. I was appalled to hear that he would be chairing the latest Celtic forum and made my feelings known to Celtic which fell on deaf ears. I'm not a Scottish Nationalist nor am I a SNP voter. In fact my politics are very similar to Brian's before he sold his soul to New Labour. I've no personal grudge to bear and care only about Celtic and the supporters in this thing and both are being cheated by this man. When a man brands half the country bigots, he should not be welcome at Celtic.