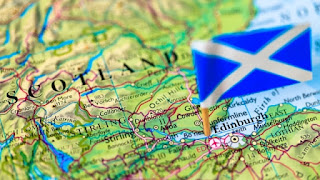 Can it really just be over two years ago that almost half this country took Scotland to the brink of independence? I remember the vibe well, the country was electric with politics with younger people in particular energised in a way I'd never seen before in my life. I was at Edinburgh College then and it was literally all folk spoke about from the return in August right up until September 18th. Indeed I witnessed two lecturers going at it hammer and tongs after a debate in the college when Tommy Sheridan, among others, spoke. I'll never forget one lecturer shouting way louder than I had ever heard him before "Margaret Thatcher ruined my life!!!!" and I could sense the awakening all around me.

Two years on and Scotland seems to be sleepwalking back to the bad old days where its protest peaked with a letter to the Radio Times complaining that another Scot had been portrayed as a drunken brawler on the BBC.  As England lurches further and further to the right, what are people here watching? Latest polls, whilst completely unreliable I know, put support for independence at 38%. 38%? That suggests 7% of the folk who voted yes two years ago now would vote no.

What are they seeing that I am not?

We are now in a situation in Scotland where perennial losers like Ruth Davidson and Murdo Fraser are given platforms to condition the populous to believe they are worthless. Weekly, Question Time works my blood pressure harder than sodium yet this is not being reflected by the general public. The ease at which the British Government can find money to upgrade palaces whilst a lot of our people don't know if they will eat today should make your blood curdle.

It may be that the country I see every day is not the country I see reflected on TV. From The Great British Bake Off to The One Show, I feel like a guy I once read about who went to prison in London in 1962 and came out in 1977 and the first thing he saw were two guys with punk hairstyles and he genuinely thought we had been invaded by aliens. I've become so tetchy to what is happening in England that I don't even watch the EPL any more. That might sound daft but once you realise it is nothing more than a roulette wheel designed to keep you paying then you see it in a whole new light.

I feel like we are in limbo in Scotland right now, desperate for leadership and a specific way ahead. Forget the dominion status independence that was on the table two years ago, hang your balls and vaginas out there and fucking go for it.

Cause I can't take much more of Mary Berry.
Posted by Paul Larkin at 11:35 PM