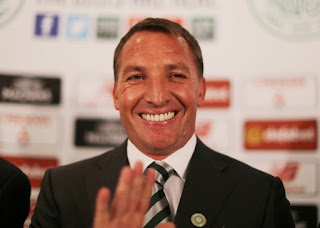 You would be hard pushed to make up an identikit Celtic manager and not have him exactly like Brendan Rodgers. The huge strides Celtic have made this season were exemplified at Rugby Park on Friday when at least 1000 supporters stood outside the ground ticketless for a fixture that normally fills us with as much enthusiasm as an episode of Question Time.

I got the opportunity on Tuesday to sit down with him in the No.7 restaurant after a press conference that flowed between the usual negativity and the ridiculous. What strikes you immediately about Brendan Rodgers is the ease he is at among Celtic supporters. Celtic isn't just a job to him, Celtic were never a second team to him, Celtic is a mission for him. This is a guy who was born to manage the football club.

When the shutters come off, what you see is a genuinely nice guy who loves the club. Not only that, he gets it. Like anyone born and bred into the Celtic culture, this guy doesn't need a handbook. In batting back in forth with him, he used a phase that set my heart on fire "I'm here to defend the culture of Celtic"

42 years I've lived, I don't ever think my heart has ever leapt higher.

You know you are talking to one of us with Brendan when talks about following the games on the radio as a kid in Ireland and the completely "no regrets" attitude he has when defending his celebrations after the semi-final win at Hampden in October.

The other thing that hits me about Brendan Rodgers is his attention to detail, dossiers are compiled on everything, no stone left unturned as he strives to make Celtic bigger, stronger and better which leads to things like our academy realising it has to get even better to get players in a Brendan Rodgers team.

The last thing, and probably the most important thing, about Brendan Rodgers is he leaves you in no doubt who he is at Celtic, the boss.

A boss who defends the culture, that will do me.
Posted by Paul Larkin at 4:29 AM