It was inevitable in the world of PR and spin we live in in Scottish football that when someone broke from the norm to actually say something newsworthy the media and their pals would adopt faux frenzy mode. Let's address the John Collins comments first. Yeah, pretty stupid to say out loud. It's hard to complain about no competition when you've recently signed one of your rival's three best players. It also is disrespectful not just to your opposition but to your own players who are out there fighting for the cause in every game.

With that being said, like a street performer loves Edinburgh in August, the klaxon sounds and The Spinners all come out to tune up their Twitter accounts and assemble the kind of concerto that would make the 'Go Compare' guy seem like Placido Domingo.

Why are we afraid of telling the truth in Scottish football?

You've only got to listen to Sportsound or tune into Sportscene on a Sunday night to hear a bunch of soundbites and platitudes normally reserved for a party poltical conference. Last night was no exception on Sportscene, with Stuart McCall treating the gig like a job interview, it was left to Mark "Willo" Wilson to provide the insight. One of his gems was about Charlie Telfer of Dundee Utd who he was glowing about. Yet ask any Dundee Utd fan and they will tell you he has been a massive disappointment. Simple research. If that wasn't bad enough, he then went onto say Sevco will win the championship by "15-20 points" based on what Mark? I'm sure we would all like to know? But no, it's the party line so it's not challenged by Jonathan Sutherland who, let's face it, hasn't paid into a football match in his life. I was actually only hanging around waiting for them to talk about the other thing I've seen fans react to this weekend, the bizarre penalty from Steven Thompson at Ibrox. With "Thommo" being a Sportscene regular, I awaited what I thought would be good TV as his mates dissected his technique.

Not a single mention.

All this came on the back of the drowning Sportsound programme last week where, not for the first time, we had a dick measuring contest from The Sevco Spinners.  Rather than talk about the huge European games coming up that week, or analysing the opening weekend of the league season in the top flight, we were treated to a Jeremy Kyle show on the radio.

All this is all the more stupid because more or less everyone in Scotland loves football and they aren't stupid.

The rise of fan media has in part came because of the amount of PR work that goes on disguised as journalism and punditry.

Yet, like most teams being out of Europe before the schools go back, nothing will change.

*Speaking of fan media, a wonderful new app has appeared. @celticnewsnow (as well as providing a brilliant Twitter and Email service) now has an app which can be downloaded for free from the usual outlets, now. You'll never need a newspaper again.
Posted by Paul Larkin at 2:06 AM No comments: 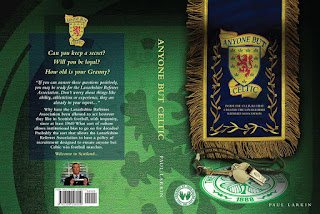 Housekeeping first. You can pre-order Anyone but Celtic: Inside the culture that created the Lanarkshire Referees Association. For your Kindle/Kindle App right now. Paperback on lulu.com from Aug 21st.

Praise be for that.

Some of you will know I've been on the end of a fierce email campaign to stop the book being sold on Kindle. It was so fierce that some of those emails had over 20 exclamation marks in them.

This kind of thing always leads to a few folk saying to me "Why do you bother?"

This week has had me thinking a lot about that, what I do and where I am. It started on Wednesday when I jumped on a bus to go for the train to Celtic Park clad in the new away top. The bus driver clearly scowled at the sight of the top. So much so that he charged the bus away clearly infuriated. All the journey I was thinking about this and scrolling Twitter as the latest round of man made meteors were coming my way via Kindle investigating the "allegations made in a number of complaints about your book"

Not really sure of the nature of the allegations (unless book critics are now mind-readers) but at half time in the game yesterday I got an email saying the complaints has been rejected.

It's a strange one for me. In terms of writing, the first book anyone outside my circle gave a toss about was The Last Pearl Diver. That person was David Limond who urged folk to buy it. (The book is a novel and centres around the 93-94 era) and he would send me tweets telling me how much he loved me. Whilst he was still allowed to use the internet of course. It didn't really put me on the radar of the dark side though, save for the odd Scottish Tea Party member.

The Asterisk Years changed everything.

The hatred and threats went through the roof (some from people who proclaim to support Celtic) and go on to this day.  It definitely hardens you (Get your mind out the gutter) but you have to retain some semblance of normality.

I have some perspective on this. I know a guy who has experienced hate and threats on a grand scale. It was for standing up for his beliefs and taking the fight to streets of Edinburgh. A lot of this was pre-internet when threats came attached to axes rather than emails.

Mine have been pretty serious outside of internet land but the discernable difference now is they are more calculated, more sinister and more orchestrated.

My message in this is I know abuse is increasing all over the place and it is putting people off doing anything. I get lots of folk in touch who want to do things, things that sound fantastic, but are scared of offending folk.

It leads to having a set of basic rules, mine are:

Never respond to total vitriol. The only purpose of this is to engage you in a stream that they hope will end up drowning you.

Don't take abuse or praise seriously. I try to keep as balanced as possible in my projects, so I'm not down for long and inflating the cranium is always bad.

Never worry about offending anyone. You will offend folk. Even if you do the most non-offensive thing imaginable, someone will be pissed off by it.

If you sense humanity, grasp it. Sometimes someone will be having a real go at me and within that you'll sense just a shred of humanity, find it and go with it.

Be yourself. I'm not big on anonymous handles and a new persona every six months, go with who you really are.

I write those because a lot of folk see what I take and get put off. Don't.

None of these may work for you, they do for me most of the time.

This week alone I've been called a "fantasist" a "tramp" "smelly" "barely literate" "uneducated" and have had at least two keyboard batterers on me constantly.

In terms of ABC and the emails to stop it being on Kindle, the common theme folk have said to me is "How can folk complain about a book they haven't read?" the answer is simple, it's not the real world. The real world is worrying about your kids, paying your rent, having food in your fridge, a roof over your head and being as happy and healthy as you can be.

The way I work, I need to build everything from the bottom. I don't get instant success on anything and spend a shitload of time developing stuff behind the scenes. The only real success has been The Asterisk Years. I suppose By Any Means Necessary was successful given it has sold 12,000 copies and still sells around 20 copies a month three years after release but I hadn't really made a penny from books previous and was drowning in life's problems when it came out.

So if you have anything in mind and you give my advice even a crumb of credibility, then Nike. If a radge gadgie like me can do things, you certainly can.

What I have been able to do is paint by numbers, not just with work but with people too.

You can pre-order Anyone but Celtic: Inside the culture that created the Lanarkshire Referees Association for your Kindle/Kindle App right now.