The curtain came down on The Asterisk Years for 2014 on Sunday and it was fitting that it was in Carluke given the enormous role people from town have played in the project. After the initial flurry of dates, I realised that the tour was an enormous commitment and that time would be needed to re-charge the batteries at some points during it. After a couple of things fell through, I seized the time from now until we resume in Drogheda on January 24th for a complete break and thank God I did, more of that later.

From the two huge screenings in Glasgow in the middle of November, the first place the film was going was Larne. Now, if you're reading this and are part of the Larne tourist board, you owe me money because every time I go there I spend the week before telling everyone how fucking great it is. This is because Larne is, bar none, the place I go where the most folk say "why the fuck you going there?" Apart from the obvious "They invited me", the point of taking The Asterisk Years round the world is to go anywhere and everywhere to get the story out there. The bonus of Larne it has great Tims like Gary Bergin and Martin Wilson, the latter being the current Mayor, who don't hide who they are and what they are all about and I'm drawn to that. It was shown in The Station Bar and once a few technical difficulties were sorted out, the film went down a storm and this was a tough crowd. It's a Friday night pub crowd, most who have a good drink in them and don't know me from Adam, Hugh or otherwise. You know what that is like? It's like being a nude model in front of a room full of artists and waiting to see if they want to paint you. But with a packed pub and tremendous reaction, you feel like the next stop is the Louvre.

Also, where else would I be made an official visitor? 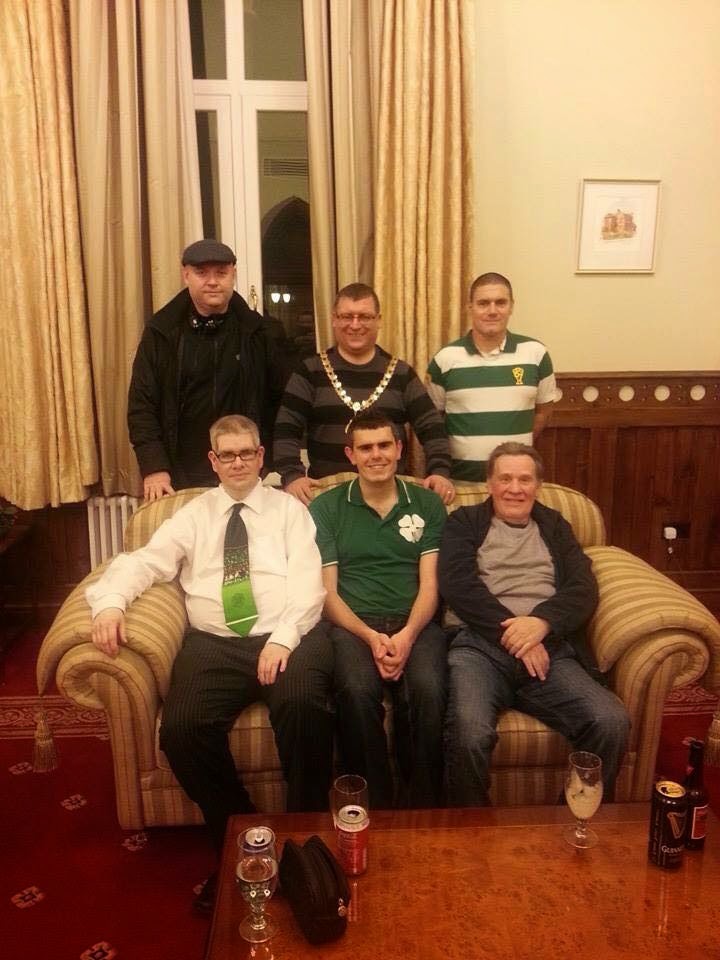 A lovely addendum to the Larne trip was the story of Una. Let down for a babysitter at the last minute, she couldn't make the Larne screening so we decided to take the film to her. So on the Saturday afternoon Gary drove to Whiteabbey and we were very warmly received. Which was handy given that we almost took a wrong turn and ended up in Rathcoole. I know I said I would take the film anywhere but I am going to leap here and say that no one in Rathcoole would be up for screening it. More fool them. The small moments though are the best moments and the afternoon we spent with Una, Patsy and family was one of the best moments. 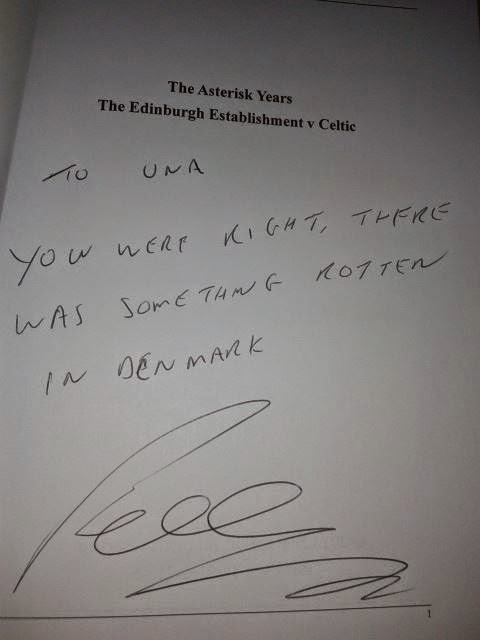 From the north of Ireland, it was onwards south to Dublin and the actual seeds of this screening were sewn in July. As many of you will know, I have some fantastic friends in Dublin and they are the reason for my numerous visits there. Back in the summer, I knew I wanted this film to show in four places, Glasgow, New York, Philadelphia and Dublin. All them are places that mean something to me and contain people who have had enormous positive impact on my life. So I had been talking to my friend Conor about doing a Dublin screening and we took an opportunity at a Dublin-Meath GAA game at Croke Park to meet up with Ciaran Kenny from the Naomh Padraig CSC in The Clonliffe House and made an agreement in principle for a December 6th showing.

This is important for two reasons, the first is the CSC were in the midst of moving venue and had not set home at this time and second is this is the kind of thing that is required to get an independent tour like this going. That day, I flew over on the early flight on the Sunday morning, ate breakfast, went to the pub, then the game, then met Ciaran, then went out with Conor, Mick and the Bhoys and was on a flight again at 6am on the Monday morning. It all sounds like a doss eh? What's not to love about 24 hours solid on the bevvy? Well, no sleep, nervous tension about all the arrangements and deadlines you need to meet, and your last taxi driver speeding you to the airport and offering you 10 euros for a coffee in the airport because he's been told that the other people in the cab are in an army. Not that I am looking for medals (I'm not a lover of armies that give out medals) but going the extra mile is what you need to do when you hang your balls out there. I've always hated this perception that folk who come from places like where I do are lazy, feckless, workshy and all the rest of the bullshit Daily Mail terms we hear. Most of the folk I know work their bollocks off day in, day out and that's something I've tried to do throughout this project, no matter what it takes, keep going, keep focused, let the haters hate and remember the big picture. Anyway kids, that's your life advice for today.

Dublin was a fantastic screening. Mark at the Bad Ass Café was a fantastic host and another big crowd pitched up and I was especially delighted to hook up with Harper and Joe from the HomeBhoys as both played huge parts in this project and both are solid comrades for life.

Why else would they hold me up? 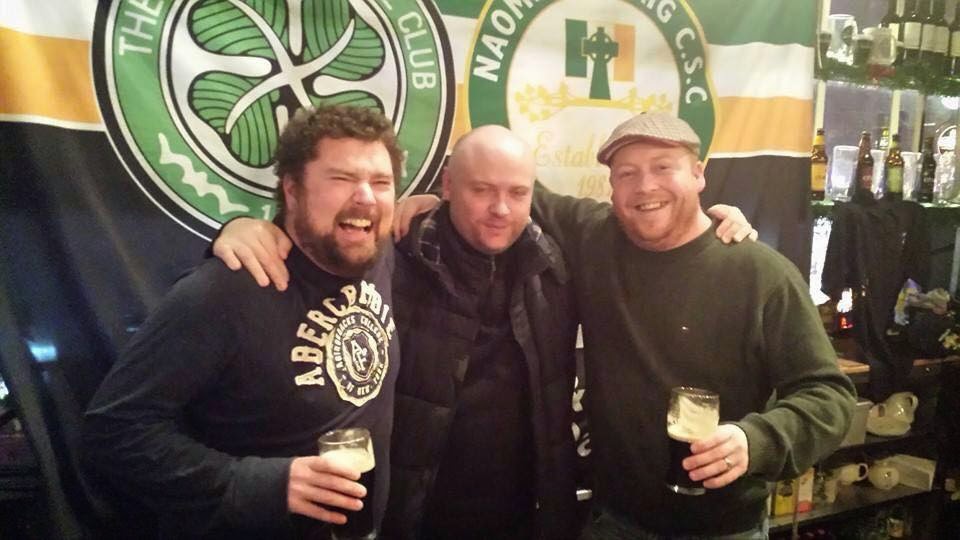 At this point, my life was college, Celtic games, squeeze in some family life and then weekend consumed by a screening. I could say I couldn't tell you the last time I just sat down with a mate for a beer or chat but I could. It was a Friday night in November and I was sharing a beer with my pal Paul at his house when the polis phoned to say someone had tried to sledgehammer in my front door. This was on the back of a mug posting spoilers of the film on social media four hours before. Relax? I'd love to. 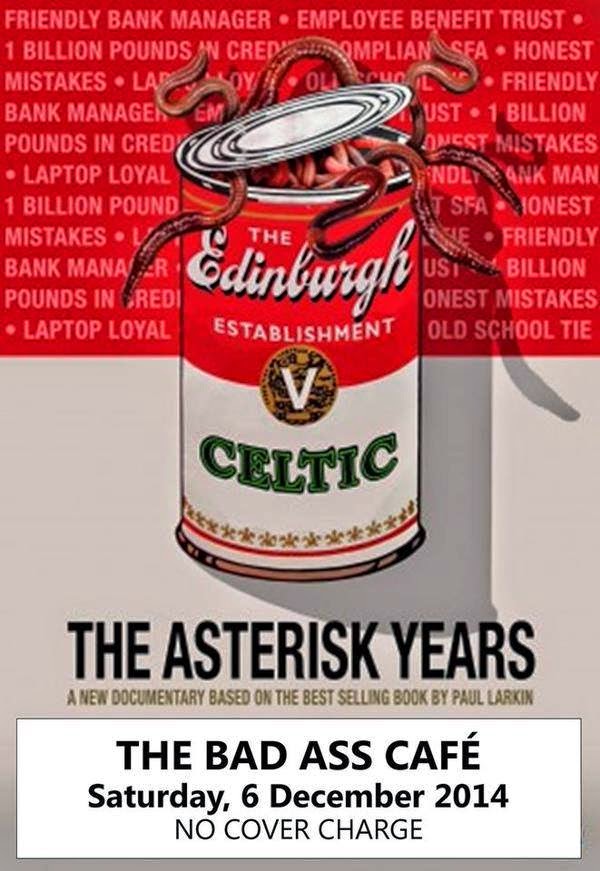 The following week was off to the Irvine CSC and that was another nude model scenario. I'd never been in the club before and only really knew Danny McCambridge, the host, through email. So on a Saturday when most folk were consumed by Christmas shopping, I took a train to Glasgow Queen St, a short walk to Central, and then hopped on a packed train to Irvine. Danny met me at the station and experience tells you this is a good sign and that proved to be the case. The Irvine CSC is a fantastic club full of great people. Great set up to show a film and a nice wee bonus of being able to raise £200 for The Kano Foundation. 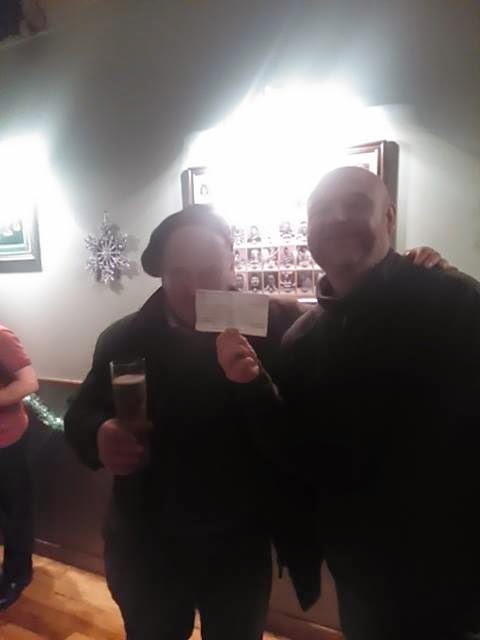 And so to Nairn. Now I'd been to Nairn in July and knew a lot of the Bhoys there, none more so than James Wallace and his girlfriend Donna (who doubles as my bodyguard) so I was completely relaxed about this screening right up until the day before when I woke up chilled to the bone, sore throat and feeling like I was ready to climb back in the womb. This coincided with my last day of college for the year and I had a report to finish and a 15 minute presentation to do. I went in and explained to the lecturer about my physical state and she said "Well, thanks for coming in and doing this then" Eh, aye, cheers.

After a gruelling day, I was home, on the couch and on the Beechams. One crap sleep later and I was up for a train to Inverness. The fucking cattle train. Three and a half hours later I arrived in Inverness and was met by James and Duncan at the station before being driven by Nairn. This was mad Friday and I felt like death warmed up. Still, it was the usual warm welcome from James' father and a beautiful room, same as last time, provided. The bed was calling me like a buxom wench with two frothy pints but it was off to The Stables Bar for a test and then a bite to eat before the show. The folk in Nairn are fantastic, guys like Kenny Nicol and Big McGoo are full of life and fun and they gave me the energy that night to keep going until around 11pm. Meeting Liam and his pal from Inverness also did. I was wrecked though and went to bed for another crap sleep before the usual poached egg breakfast and back on the train for the next three and a half hours. 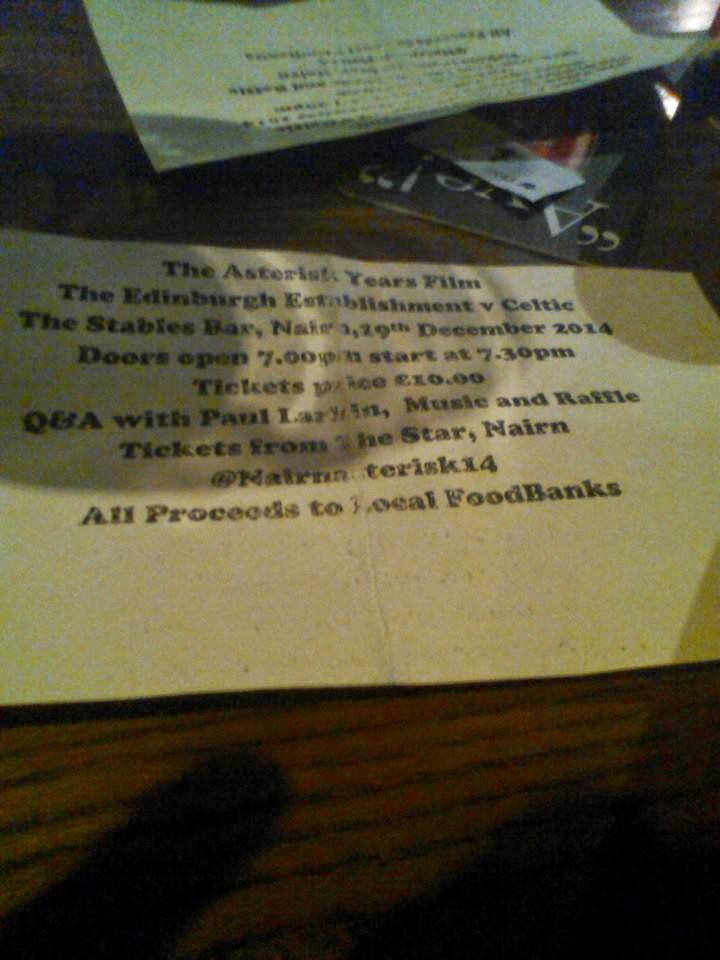 I had five days in Ireland to see my youngest son and take a break for Christmas but in reality, I was absolutely fucked. The flu was gripping me like a medium sized T shirt and it was hard to really enjoy myself when the only day I wasn't travelling, due to various family commitments, was Christmas Day and it was taking it's toll. Back Friday night and I was exhausted and ill. I was in no state to go to the Ross County game but I had to because I was picking up a signed ball for the Carluke do on the Sunday. At this point I was probably looking to folk like I had just crawled out a swamp.
And so to Carluke on Sunday. I actually felt reasonable on Sunday morning, after a dose of Beechams and Ibuprofen and had to be pretty anal with them, telling them I'd travel alone and back because I wanted to control my arrangements so I wasn't relying on anyone else. 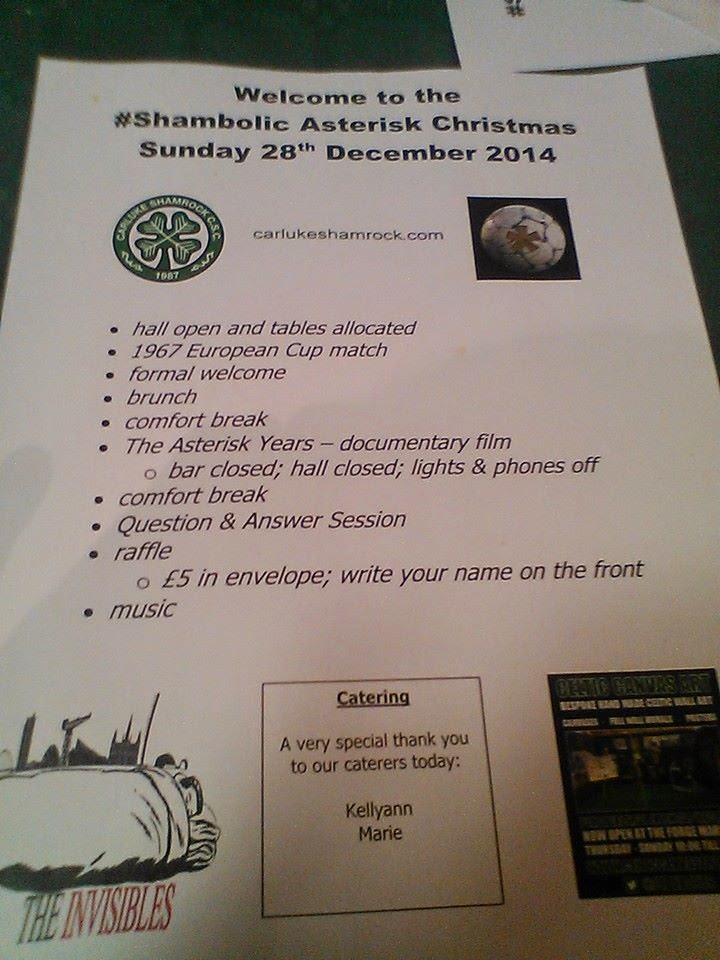 I was picked up at the station by the inimitable Richard Swan and we were joined by the McCardie brothers, Brian and Martin, and off to the hall. And what a hall. The Carluke Bhoys do not do anything by half and the welcome and hospitality I received from President Peter Connolly and his committee of Michael McKeever and Dougie Mooney is something I will never, ever forget. Then, I was blown away by the reception the film got, a standing ovation, and was presented with the picture below, which now has pride of place on the living room wall, and I was speechless. It sums up the Carluke Bhoys and Richard Swan in particular (Was delighted to meet his wife Joanna and get enough material on him to last a lifetime though) and makes all the crap worthwhile. Most of it isn't crap though, that's because of folk like you.
Now if you don't mind, the curtain is closed for now, yer auld pal needs a break until we resume again on January 24th.
And breathe.... 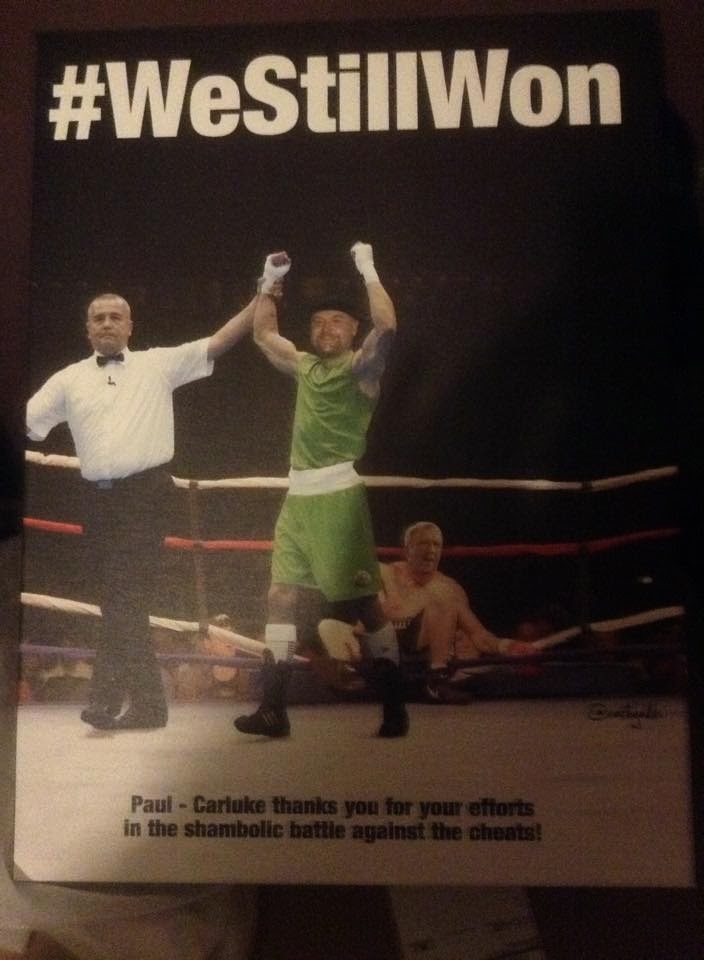