Ally McCoist is a strange character. For years he cultivated his "Cheeky Chappie" image but now he seems to be determined to be seen as Al Capone. McCoist comes from a time when his Rangers could do whatever they felt like. The rules didn't apply to them when they existed and McCoist seems to think this still applies to Sevco.

His ludicrous ranting about having a list of 100 players who bet on football, as usual, completely misses the point. Only Ally McCoist wouldn't have a problem with what Ian Black actually did simply because he is so entrenched these days he would rival Baldrick in Blackadder Goes Forth.

Rangers, as we all know, thought they were above the rules and in the main they were right. Their attitude extended to UEFA competitions and never more so in 1998. Shelbourne drew Rangers in the preliminary round of the Uefa Cup having missed out on a Champions League qualifier after finishing second in the league. The 22 July tie, ostensibly a home game, would be Dermot Keeley's first game in charge. Because of security fears, the first leg couldn't be played at Tolka Park. A number of alternative venues were considered, including Lansdowne Road – Kilmarnock's Rugby Park where Shelbourne played the previous season in the European Cup Winners' Cup – and Carlisle United's Brunton Park in the north of England. It was finally agreed to meet in the middle at Tranmere Rovers' Prenton Park outside Liverpool.

Hardly a fair decision given the reason their were security fears were solely down to Rangers fans reputation.


Despite shifting the Uefa Cup game out of Ireland, the Shelbourne/Rangers tie was still classified as a Category A security risk by British police, so a major security operation cranked up around Prenton Park. Not even the best-laid plans could account for those who travelled to the game intent on causing trouble though. This was borne out as the Shelbourne team bus came under attack yards from Prenton Park. Only the windows of the team bus separated the Shelbourne squad from their attackers. Winger Mark Rutherford ducked for cover inside the bus as bottles, rocks and beer glasses flew from all angles.
Mark Rutherford "There were hundreds of them on either side as we were driving in. I couldn't believe the hatred in their faces, shouting at us through the windows"

The hatred continued through the game, Shelbourne players were spat at, abused and had missiles thrown at them.

After scoring a goal against Rangers that night, Morley had an idea:

"I'm not a religious person in any way or form. It's just something that when Gascoigne played the flute there was murder over it. I'd always said if I ever played with Celtic and scored against Rangers I'd bless myself and I wouldn't care what the consequences were. It's not that I was sectarian or anything like that. It's just if you do something that you've always wanted to do in your life then you'll want to do something to remember it by. I just turned around and put my hand up to my head and blessed myself and, just as I finished it, I was mobbed. It's one of those moments. It was great winning leagues and cups and I've got all the personal awards, but that was it for me. I'd done it at the highest level, scoring in a Uefa Cup match against a serious team with a manager who had serious talent. I never got an Irish cap. I was close but, even if I got an Irish cap, this would outweigh it by a mile."

Needless to say it went down like a lead balloon with the hordes down from Scotland and the irony was lost on them.

This was never going to be acceptable to "The People". They had gone out their way to stop players like Amoruso, Porrini and Negri blessing themselves and warned Shelbourne to instruct their players not to do so at the return leg at Ibrox.

There's the mentality right there.

Not content with getting the game moved, all because of their fans, they cause mayhem at the moved game, spit at and abuse players, attack the team bus and after the game the first thing they are doing is telling the other team how to behave.

That's where Ally McCoist fails. No one is taking heed of anything he says these days, he's like the old comedian who is desperate for folk to laugh at his jokes just one more time.

By the way, Shelbourne didn't get mad, they got even. They agreed not to have players blessing themselves.

Instead they played Gaelic Football at Ibrox. 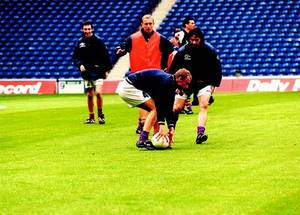 *Thanks to Paul Keane for parts of the text and Conor Fallon for the background.
Posted by Paul Larkin at 12:32 AM