So the book has been signed off on at last. That was the main point of my trip this week. I counted in the last eight days that I've been in Scotland, England, Ireland, Germany, France, Belgium and Holland.

If only I'd been sponsored by Ryanair. 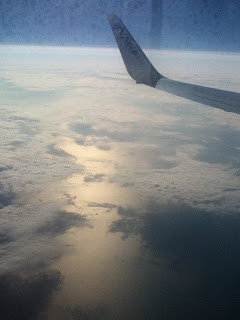 I'm not trying to make it sound all jet-set by the way. The stress in the last few weeks and months of my life has been incredible. Not just with the book either, I have a lot of family and health issues going on just now and the emotional strain of it all has been tough. Almost unbearable if truth be told.

What this has done has made my new book a bit of a mission. This is why lawyers get involved in things like this. You see my previous stuff may sail close to the bone in terms of the graphic description of certain situations but none of the folk involved are the types who are litigious. (Well, none of them have sued me anyway)

The people mentioned in this book are different.

They are most powerful people in Scotland who operate at a level which is above even the likes of Alex Salmond.

As information about the book has dripped out, I have had a few people ask me if I am sure I know what I am doing? Similarly the sources I have and the lawyers I have spoken to have all said things of a similar vein and I'd be lying if I said that it hadn't crossed my mind on occasion.

The thought that always springs to mind though is "What is the alternative?" I believe I have the evidence that shows Celtic were cheated way beyond the EBT scheme.

Now, many of you reading this will be of a similar age to me and will have supported the club through the entire era that this happened in.

It was done by powerful and wealthy men who were untouchable and it was never supposed to end.

The most galling thing for me was that it was happening a brisk walk away from my house.

I can kid myself on and say that had I known about it when it was happening then I could have done something more than tanning of windaes but I know it's not true.  So showing Celtic supporters how it happened, who was involved and why history should be so, so different is my way of doing a wee bit to fight back.

Of course, I'm not expecting to change the world here. I know there will be a deliberate apathy from a lot of the MSM, I know the stuff will be attacked by others and I know this could be a testing time for me personally but I am going to try my best to get this story out there.

I've been asked a few times how many of this book I expect to sell? The answer is I've never gone into a book thinking about that, the goal is to make as many Celtic supporters as possible feel vindicated.

There is no hidden agenda. I'll leave you to read about those in the book. 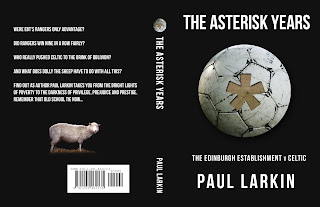 The Asterisk Years-The Edinburgh Establishment v Celtic out November 6th
Posted by Paul Larkin at 1:29 AM