When you're writing about someone in depth, especially someone you despise, it is important to find out what makes them tick. Wallace Mercer is someone who features in my new book. A ruthless business man, he actually wasn't someone who was turned on by fame. When you think back to the times you saw him on TV or heard him on the radio, he was normally in defensive mode, defending his team or manager at given times. Mercer actually was an immensely private man who guarded his family privacy.  Indeed when he made his ill-fated move to takeover Hibs, Wallace lived in a bubble that didn't even comprehend the force of resistance that would follow his attempt to buy Hibs. He was prepared to ride that out though until his family life was affected. His kids had to have guards taking them to school and his wife was abused in several places and within one month of the attempted takeover, Wallace was giving up not just on the move but with Hearts in general.

His family life has never been his prime motivation and he absolutely loves the limelight. The dynamic he created at Rangers meant that he was the face, voice and image of Rangers. There was no room for anyone else at his level. That's why someone like Martin Bain was able to move so quickly through the ranks at Rangers, not because of his ability, but because of his acceptance of being a glorified P.A. He was also, of course, one of the best paid personal assistants around.

Murray could simply never allow someone to come into Rangers that would be on his level. He was King and that was the end of it. Murray is motivated by power and fame. We know this already due to the multitude of Emperor-like interviews he gave to willing lapdogs over the years from behind his big oak desk at Charlotte Square in his Del Boy-like shirts  (always blue or red with a white collar) and his effortless way he would lay on the charm for a willing typist.

This was never more apparent the day six goals flew into the Rangers net in August 2000 when Murray, within hours of the final whistle, was working the phones, assuring his lackeys that a monster move to bring in Ronald De Boer and John Hartson was under way. He left out the part about how it would be funded (I don't in my new book however) and the lackeys were sent away to do their best to take the gloss off a monumental victory for the Tims.

Many people are taken in by people like Murray, in the same way they were taken in by Bernie Madoff, and it was partly down to his charm, his leased private jet and cocktail parties in Jersey that Murray was able to seduce many people into not looking closely at his whole operation.

Boy did he love being King.

That's for November 6th though.

In the meantime, here's my succulent lamb (sandwich) from last night. 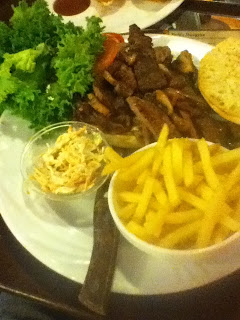