I arrived in Frankfurt on Thursday night after a particularly bumpy flight and was delighted to see Bob waiting at arrivals as I passed customs. There is never really any pissing about with Bob and before long we were purring along the motorway in his Mercedes with some sort of classical music playing on his music system, the kind of system Paul Oakenfold would be jealous of.

After we made small talk, I plucked up the courage to ask where we were going and "France" came back quicker than my question was delivered. Turns out Bob lives in France, a house high up a hill with neighbours a mile away and a last stretch of road that would make kidnapping, killing and desposing of body as routine as having your breakfast in the morning.

His house is speactacluar with a TV and cinema system that would make Cineworld jealous. As I complimented him on it he told me that back in the early 80s, David Murray invested in a laser disc system that was state of the art and cost a fortune. Only for it to be blown out the water by VHS and Betamax about three months later.

It takes a special kind of business man to be blown out the water by Betamax.

After a great kip in a superb, ensuite, guest suite, it was up for breakfast and off to spend the day in Metz which iss about a two hour drive from his home. 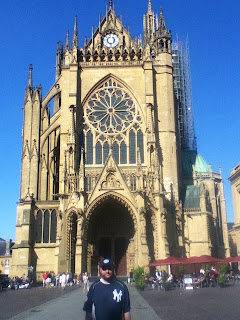 It was a boiling hot day and watching the world go by (Ok, looking at beautiful women) is always a great way to spend any day. Especially accompanied by some great food which came with an apology "Sorry, no succulent lamb, maybe tomorrow"

Bob then told me that he had arranged for us to the Metz-Avignon game that night and I could definitely get used to this. 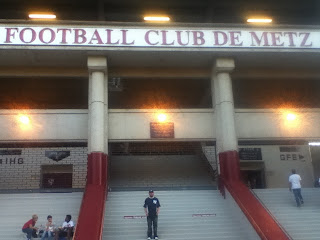 The seats were fantastic, right in between the two dugouts, but the football was unspectacular, Metz are only now climbing up up the leagues after a few years in the wilderness so the crowd was around 15,000 in a 26,000, bizarrely designed stadium, that saw Metz win 1-0 despite spending most of the game looking like they would struggle to beat the Celtic u16 team 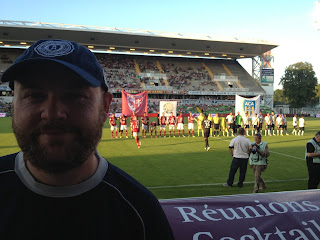 Post game, it was back to the car and the two of us were pretty tired by then. Having said that, it is ok being tired knowing that, for once, you will be sleeping in a room that will not have drunken shouts from some headcase disturbing your sleep.

I am still off the drink you see.
Posted by Paul Larkin at 1:20 AM