"The fans are Celtic, without them, it's nothing" 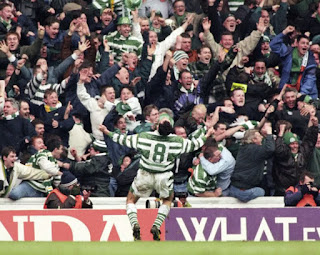 The words of The Maestro.

Words that the people who run Celtic need to take heed of now as much as any time in our history.

I don't know what the majority of fans at other SPL clubs are thinking right now so won't attempt to comment but what I do know is that the vast majority of Celtic fans tonight are absolutely raging.

Deep down, I think most of us knew something like this would happen. The stench of corruption at the SFA hangs over the game in Scotland like the brewery smell that used to hang over Tynecastle.

When I heard that SPL "Chief" Neil Doncaster was out the country today, the day that the most important tribunal in SPL history was to deliver a verdict, I sensed it would be a fudge.

When it came, my timeline on Twitter lit up with Rangers Oldco fans delighting in the, er, guilty verdict.

The sort of triumphalism that remided me why so many people hated them, because we always knew it was celebration that had a helping handshake.

As a Celtic fan, I feel two emotions right now, chearted but energised. The raw passion that has came out of Celtic fans today has reminded me again why I am a Celtic fan.

People who refuse to just sit back and take anything thrown at them.

Folk won't accept the multitude of pathetic journalism in this country.

Bhoys and Ghirls who today got conformation that we were cheated.

The fight has surely just begun.