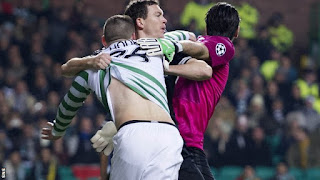 A lot of chatter since Tuesday night about cheating, no not Craig Whyte and Jim Traynor, Juventus at corners. I was sitting pretty close to our corners in the second half and saw it all unfold first hand. By the letter of the law, Juventus gave up four penalties in a fifteen minute spell alone. The way the Referee pranced about the box rather than actuially deal with it had awful memories of Lubos Michel flooding back.

Whilst it's frustrating and angers you because you know, at this level, we need all the variables of football going in our favour to have success, the reality is we need to be a bit cuter and dish out a bit of the same ourselves.

Now, someone tweeted me last night saying the ref was all about "keeping the natural order of European football" and I buy that, you only need to look at what Barcelona get away with year in, year out (dropping a whole team ring any bells?) to know it's one rule for some and one rule for the others.

However, with clowns like Blatter and Platini running football, it's not going to change any time soon.

There has to come a time when our team and manager comes of age. When it is us being smart to win these type of football matches. I'm not just talking about the odd foul here and there either. You will have seen when Lustig went off, Juventus put all their attacks down our right hand side, knowing there was a new player there and before said new player had a chance to breather, we were 3-0 down..

As supporters too, we need to be that bit calmer. Too many folk panic at one slack pass or get on the back of a player when he needs their support more than ever.

There were plenty positives about Tuesday as well. For a good 60 minutes Celtic played really well and carved out a lot of chances but were up against the guy I still say is the top goalie on the planet. The support, again, created an atmosphere that is unrivalled anywhere.

I hate Juventus. The club and their fans are the embodiment of all that is wrong with football but when we come up against them again, being gentlemen won't cut it.