When Lustig fights back 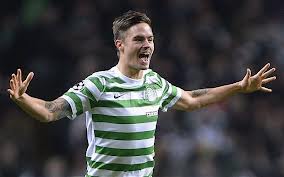 One of the undoubted success stories of this season has been the transformation of Mikael Lustig. I have no doubt that all the tools were already there, he just wasn't showing them a lot when he came in from last January.

A really good European Championship has beem followed up by a very solid season whether it be at right back, wing back or centre half, Mikael hasn't let us down. It has been said that he has been working closely with Danny McGrain and there is no better defender to learn from. This culmintaed in a superb performance last night against Gary Mackay-Steven which I hope leaves the latter realising he has a long way to go before he gets anywhere near the top level.

Lustig is a non-nonsense defender who, when 100% focused, plays the way a defender should play with a "they shall not pass" type of attitude. Perhaps his one flaw has been to occasionally switch off in games but that seems to be no more than a passing fad and can easily be worked on.

Once again our scouting system has unearthed a gem who was brought in for a modest fee and would already command something a lot higher. That said, I want the big man to stay for a while yet as he is the prefect Yin to Adam Matthews Yang,

Plus any wearer of facial hair is ok in my book. Just ask Danny.