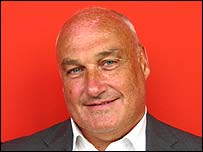 You don't bring in a firefighter when things are going well.
Posted by Paul Larkin at 2:09 AM