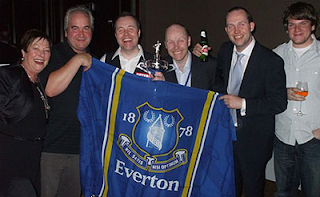 I had a really nice email this week from Keith McKenna @snash67 .  Keith won a signed John Higgins snooker cue at the book launch for Poles 'N' Goals and Hesselink and asked me if I had would have any problem with him donating the cue to a charity called www.walkingwithgiants.org

You see to give you a bit of background, last year on holiday Keith met the Connerty family from Liverpool. Their son Alex suffers from primordial dwarfism. Keith got talking to them. They were telling him they run a charity called the walking with giants foundation http://www.walkingwithgiants.org/ to provide a support systems for other families, and also to raise awareness about the condition in the hope of attracting more funding for research.


This year they noticed a marked improvement in Alex that just goes to show how the hard work and love all of the volunteers put into it, especially the Connertys'. Young Alex is an Everton fan so it's coincidental that John and his brother Jason are also blues (well their English team anyway)
Of course neither myself or the Higgins crew had any problem with this and it's a tribute to the kind of guy Keith is that he is making this fantastic gesture.
Posted by Paul Larkin at 12:52 AM