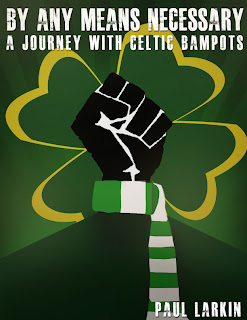 Another Book Launch done then. You can never really prepare for them as there are so many variables involved. The person who is faced with the brunt of these is @brummiebhoy . Liam is the unseen hero of these things. He is the one who puts in all the hard work behind the scenes, he's one doing the door, booking the venues, hiring the band, running the night and having to put up with panicky bar owners(of which there are plenty) He does all this with minimum fuss and, speaking personally, I could never thank him enough.

We try to keep everything ticking over with as little financial outlay possible to the people we want to come. Buyng a book and a raffle ticket is the maximum we expect. We have no real budget ourselves and this why you rely so much on others. With that in mind, tribute has to be paid to @luxmonty, @btwcelticshow and @bronxbhoy . Their sponsorship ensured that you could listen to a band and there were books there if you wanted one. The fact that they come from Luxembourg, Philly and The Bronx, tells you all you need to know about The Celtic Family.

The raffle was good. It could not have been done without the hard work of @chibchenko and @weekates who hopefully got round everyone in the venue and ensured that some people went home very happy with their prizes.

Then we come to the Rebel MC, @aupaceltic , again, nothing could really be done without his input and support. He probably doesn't even realise how important tose things are. He should now.

The platform for my stuff, in terms of  my website, is all done by @gaffney67, a brilliant talent and very good rates for all your web and design needs.

The professional video you can see here www.lovestreet86.com is down solely to the guys @carlukeshamrock A fantastic keep sake for me and a unique window for people who couldn't make it. I'm indebted to them for bringing the night to the the Bampots worldwide.

Another person who has to be named is @madameking She was the lady selling the books on the night and a grand job was done. Her and her husband Tim also gave me a lift home, which was greatly appreciated!

One of the reasons nights like these run so smoothly is often because of the help of someone who most folk didn't realise had a role. That was because of how well he performed it. This was @machrie72 who adopted a "Head of Security" type role and ensured all of you had a safe and fun night.

That band I mentioned earlier are called The Amadans and they should be hired for any event you are having. @johnjo1888 and crew always put on a storming set and really create the vibe around our events.

Finally, to all the Bampots I met on the night, some again, some for the first time, you are the reason these things are possible. None of the above could do any of the above if you weren't interested. So if you turned up, bought a raffle ticket, asked a question or just said Hello, you'll always be in my heart.

That also goes for each and every one of you who buys a book, you mean the world to me.

The new book, cover at top, will be out on Oct 26th and there will be a Bampot night attached to it, probably at the end of November. It will be slightly different to the last two but the Bampots will still be the main stars.