Celebration of the Bampots 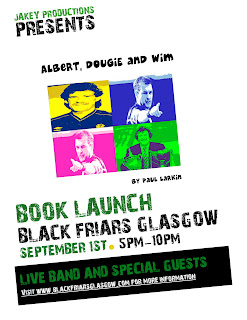 Had a good laugh, as always, on @btwcelticshow yesterday. I don't care what anyone says, if you write something, you want to talk about it. The new book isn't really a new book. It's From Albert, With Love, Dougie Dougie and Wim's Tims in one sitting. It also has a completely new story of 15,000 words, Channeling Charlie Mulgrew, and a postcript of 3000 words that should interest a few folk. Added to that there is a 5000 preview of my new novel, The Last Pearl Diver,  which is out next year.

A donation from the sales is going here http://www.samh.org.uk/

I'm not making a big thing of that, just something I want to do.

The Launch details are above, free entry, a band and some special guests.

The launch though is important. If the last one is anything to go by it will be full of Internet Bampots. I think it was Graham Spiers who first coined that phrase "Internet Bampots" and having met quite a few of them, he was right!  Yesterday on the show I was asked about the effect the likes of Hail Hail Media and others have had on Celtic and the issues within Scottish football and I think it is immense.

I think we are all agreed that next season some of the old media will go into overdrive against Celtic, the SPL and anyone who spoke out against a Newco. This is why the Bampots are important. Last book launch I was interviewed by @carlukeshamrock, a year ago if I heard that name I'd have an image of a supportes bus? Now, it's a slick, well run podcast by a superb bunch of Tims.

Things are evolving every day and now, more than ever, we need to stick together.

So if you're in town for the Hibs game at Celtic Park and fancy meeting a bampot like yourself, come along for a great Celtic night.

Bampots welcome.
Posted by Paul Larkin at 12:33 AM