An Orange Labour of Love 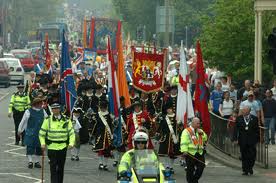 The news that Glasgow City Council is funding the Orange Lodge's Jubilee celebrations will come as no real surprise to most Republicans and/or Socialists. Early in 2000 it was discovered that West Lothian Council was giving Orange flute bands a "Culture Grant" to travel over to the occupied six counties so they could lay siege to Catholic areas in the north. Sinn Fein were able to expose it and get it stopped but the entnagled web that features the Labour Party in Scotland and the Orange Lodge is one that is well worn.

Be under no illusion that this is the Labour party getting their foot soldiers ready for the Independence referendum. Who better to get onside than the one lot of people who just want a Union no matter what. For me independence isn't about being an SNP supporter(in fact the launch of the Yes campaign almost drove me to the No camp given how utterly dreadful it was) it is about the break up of the union and the pushing towards an independent socialist republic.

Currently we live in a country where kids from Thailand must remove their Celtic tops for fear of offending anyone yet anti-Catholic bigots are funded to spread their bile where they see fit. That's why I will be voting for an independent Scotland. That's also why I've never voted Labour, a party whose MP's cheered in parliament when they heard news of James Connolly's execution, in my life.

The battle has started in earnest, it's time to pick a side.