The hardest game of the Centenary season 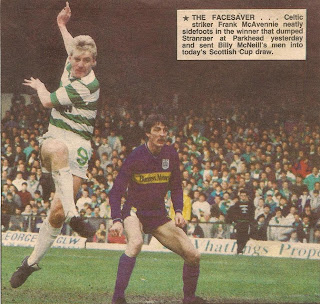 Just under 24 years ago(feck me that's scary) Celtic had undoubtedly it's stiffest test enroute to a double winning year. Anyone at the game will know just what it was like. What may shock some of you is that it did not come from rangers or Aberdeen, it actually came from Starnraer. Being a lowly second division side, no one at Celtic Park that day expected anything other than a routine thrashing and when Frank McAvennie put us one up in six minutes, we all expected an avalanche. Sometimes in games like this you can score too early and this was one of them. What happened next would enshrine a new name in Celtic history.

The Stranraer striker, who had scored a decent 28 goals for them, was playing his last ever game for Stranraer before emigrating to Chicago, USA. He had a fair old tussle with Lex Baillie that day and had many chances to equalise but after missing a penalty, a great save by Paddy Bonner, he may have realised then it was not going to be his day.

I was in The Jungle that day, we always stood towards the old rangers end when we went to The Jungle and had a great view of what was unfolding. Quite frankly, I could not beleive it. Time and again Stranraer bombed forward and Billy McNeill would be out the dugout screaming at our lifeless players.

It looked like we had got away with it when in the last seconds Bonner and Baillie, who had been by far our best players, indulged in a little "After you Claude" and ended up in an almighty fangle. The ball broke to Clelland eight yards out, goal at his mercy and....he ballooned it over the bar.

The sigh of relief was evident all around.

To be fair to Clelland he took it all in good humour, the sort of thing you can do when it is your last game, and said after the game "I just phoned the Samaritans there...and they were engaged"
Posted by Paul Larkin at 2:21 AM