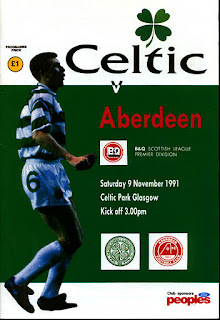 This was a big game. I remember it well because it was the sort of game you don't get now, two teams who are in the title race not just from Glasgow, a big signing that week in November 1991 and a huge crowd for both teams. November 9th 1991 and the crowd was swelled by the fact that Celtic had spent £1m on a new centre half with a good pedigree (changed days now eh...), the player in question was Tony Mowbray. Apart from a very good debut, Tony also hit the corner of bar and post with a 35 yard shot that would have sparked a Jungle pitch invasion had it gone in.

Aberdeen scored first through Eoin Jess, who was always a a bit of a thorn in our side, and I remember standing under the Number 2 in the Celtic end, but a bit further forward than normal as it was packed and the goal came came at the old huns end of the ground and the heart sank that wee bit further when you realised, from afar, it has gone in.

The atmosphere was electric that day and you could not move in the ground yet, as usual, the crowd was put out as something ridiculous like 38,000 not the actual 55-60,000 it actually was. Jim Bett was playing well when he was tackled and before you could say "Get it up ye Bett ya hun bassa" Paul McStay had split the Aberdeen defence wide open, Charlie Nicholas had nutmegged an Aberdeen defender, dragged it wide of the goalie and somehow slotted it in past the other Aberdeen guy on the line. 1-1 and the scenes of genuine joy from the players and Charlie in particular are things we see too little of these days.

Second half came and so did the tension, you knew the next goal would decide and that came true when Gerry Creaney, who at this point was looking like Gerd Muller, off the bench a few minutes before, bulleted home a header, downward then bouncing back up,  that gave us the two points and sparked more scenes of wild joy.

Hard to believe all this happened 20 years ago today, Aberdeen were a really good side then whilst we were about slide into another decline that would take years to get out of, yet no one that day would have believed that.  Simply because back then a 2-1 win over Aberdeen had you out drinking all weekend.