The first Bloody Sunday came after the IRA discovered a team of undercover British Agents known as "The Cairo Gang" and executed them, dealing a huge blow to the British Intelligence operation in Ireland. The rection to that first Bloody Sunday was an upsurge in the IRA campaign that ended a year after with 26 of the 32 counties given back. What took place at Croke Park that day horrified even the British King. The IRA had men queuing up to join that day and Eamon De Valera, who was leading the campaign, saw his popularity surge. Eamon De Valera went on to become President of Ireland and was a welcome guest at Celtic Park(below with thanks to The Celtic Wiki for the pic) 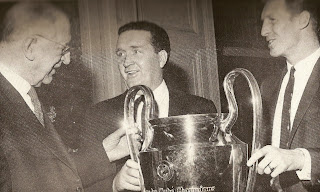 After the massacre in Derry in 1972, Ivan Cooper, a Protestant, who had been one of the leaders of march that day said "I have personally witnessed men, hundreds of them, queuing up to join the IRA today, and who can blame them?"

There is an emotive debate going on at the minute about songs, culture and heritage. It is being had in the backdrop of yet another of our players having to be moved to a safe house after an attack on his property on Saturday morning.

Whilst the debate rages, I don't agree with the attempts to make the old IRA one thing, and the PIRA another. I would not like to go to the house of this woman here

and tell her that her son is not as much a martyr as James Connolly is. Let's be clear here, these people were not supermen, they were ordinary guys in extraordinary situations. They do not deserve to be told that their cause wasn't as justified as someone elses.

Especially when it was exactly the same.
Posted by Paul Larkin at 7:10 AM

Email ThisBlogThis!Share to TwitterShare to FacebookShare to Pinterest
Labels: IRA