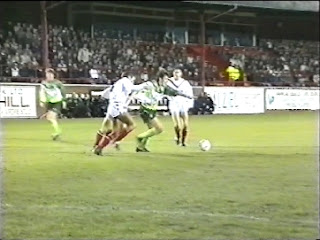 November 1991 for Celtic had more twist and turns than Tommy Burns. One game though stands out more than any other for me, a 3-0 win over Airdrie at Broomfield. First of all, this game should never have been played. It was pretty much dark by 2pm that day and the rain pelted down throughout it. In these situations you always relied on the radio. I should say I love the radio but back then, at 17 years old, I thought anyone who took a radio to the games was a geek. Two guys on our bus did and they both were. You'd hate these guys when, enroute to Tannadice or somewhere, they'd gleefully inform you the game was OFF, always emphasising the OFF. Or maybe that's just how I remember it.

For this game though it was still on although at Chapelhall, our normal stop and a short drive to Broomfield, we still feared the worst. If you remember, the buses used to park a good mile and a bit walk from Broomfield so you were left at the mercy of "Section B", the feared Airdrie casual crew. Not really. The only time I ever saw them was at the other side of the fence from us in the ground standing in their orange sashes and, latterly, KKK outfits.

Celtic were wearing the worst away strip in the club's history, as you can see from the photo, although I'm guessing what has shocked you more in the photo is Tony Cascarino about to score a goal. Tony didn't have the best of times at Celtic to put it midly and had only scored two goals thus far. His first was set up by Tommy Coyne, an open goal versus Hearts, and he somehow managed to hit at the Hearts goalie, Henry Smith, with his goal attempt, comes off him, and goes in. His second came at Ibrox, minutes after being cheered on by baying huns as he came off the bench, Nigel Spackman played a brilliantly short back pass and Cascarino slotted it past Goram to get us a 1-1 draw. That was that until this game. You see not only did Tony score a great goal that day, turning the defender and bulleting home from 20 yards, he played his part in one of the funniest things I've seen in my life.

Spurred on by his goal, Tony flew into tackles and started to look like the player we thought we were getting. Unfortunately for him one tackle resulted in him completely melting a Policewoman on duty who got pretty badly injured. If that wasn't bad enough, when the stretcher guys came round, things got a whole lot worse for her. They put her on the stretcher, rain teeming down, right front of the Celtic part of the ground along the touchline. Knowing the jeers were getting louder, the two stretcher guys thought there was only one thing for it, run like fuck.

Except there was one problem.

All to the Laurel and Hardy theme tune.

St Mirren beat The Huns at Ibrox that day and we left the ground chanting "Feed The Bear" in light of Roy Aitken's recent move there.

Tony scored one more goal and let in February 1992.

The Policewoman probably never recovered.
Posted by Paul Larkin at 8:40 AM