He is a Billy and a Tim 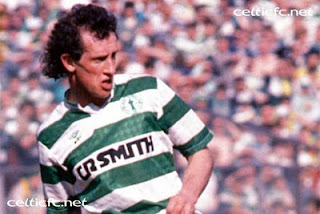 I've had the pleasure of meeting Billy Stark three times in my life. The first was in 1987, at a big Celtic dance in Glasgow when as 13 year old boy I nervously approached him for an autograph. He said "what's your name son?" I told him and he signed my full name on the programme for the do. Don't think anyone else I've ever asked for an autograph has done that but it felt great. Then in 2007 I was heading to Inverness for the cup game there in February of that year and myself and my mate Rab stopped somewhere for breakfast and there was Billy Stark walking in his, I think, Queens Park jacket as he and his team were playing up there against someone (I could check but my fingers are killing me), we stood and chatted for about 15 minutes and he could not have been any nicer again.

The last time I met was at a dance at Celtic Park in 2009 where he came along to present awards and made a fantastic speech about how it was always great to be in the company of Celtic supporters and that every day of his life someone would come up to him and talk Celtic and he loved it. So, from my perspective, Billy Stark can do no wrong.

As a player at Celtic he came in just at the right time, summer 1987, where we needed experience and he provided it. His goal against The Huns in August 1987 lives long on the memory, Peter Grant dummying it and Billy firing a low shot right into the bottom corner in a game also remembered for Graeme Souness trying to remove Billy's leg in the second half and being red carded amidst scenes of wild joy from the Celtic support.

A key component in the team that won the Centenary double, Billy almost signed for Hearts that summer before coming to us and his goals that year were invaluable. He had fantastic knack of ghosting in at the back post and scored lots of headers by doing so. Of course Celtic was where he forged the friendship with The Great Tommy Burns and they would go on to manage the club from 1994-1997. Who can forget Billy Stark in tears of joy when we lifted the Scottish Cup in 1995?

So all this means that it is fantastic to see Billy doing such a fantastic job with the Scotland U21s and I'd like to think that once folk wake up and realise what a mess Levein is making, Billy Stark will be the man Scotland call on. I've also heard that when the SFA have their 5 a sides between employees, Billy Stark is the best player on the park every week. The football brain never leaves you.

Billy Stark did more in two seasons at Celtic than most do in a career, his eulogy at Tommy Burns funeral showed the measure of the man and I wish him nothing but success in the future, which hopefully includes a return to Paradise one day.
Posted by Paul Larkin at 5:42 AM