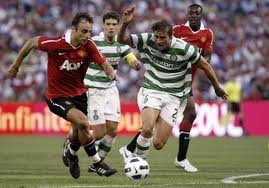 Last night on Twitter I was involved in an interesting and inspiring discussion about why Celtic are so hopeless when it comes to marketing the club in America. With Celtic's continual "Ryanair" type strategy of fleecing the people you already have over and over again it means that every time they set foot in America they charge a fortune for tickets, ignore most fans and can't be arsed bringing merchandise over, something that even Timland in the Gallowgate has managed to do successfully.

Celtic are continually badly advised on how to deal with America, their clusterfuck approach to the recent TV rights deal alone should have everyone involved at their end hanging their heads in shame, because they think that a few employees who talk to two American guys once in a while will know what to do. Let's address that first. People who live here will tell you that it takes years of actually living here to understand American culture and, let's be clear here, the culture in Philly is totally different to LA and LA is totally different to Chicago. Is that so hard to understand?

The powerbase of Celtic in America should be New York. There are currently four clubs in NYC and hundreds of thousands of people with an affinity to the club. The problem is Celtic look at who subscribes to Channel 67, who goes to clubs, who is happy to be ripped off for merchandise that takes ages to get to them and think, that's that. My point is this, I've supported the New York Yankees from Edinburgh, Scotland. I say supported, that means I stayed up late for big games and checked the score in the morning for all others. The Yankees probably have no idea I exist but I could go half a mile from my house in Edinburgh and buy their merchandise. I could watch most of their games, if I chose to, on ESPN America. The Yankees don't know I exist, but they still got my dollars. Are Celtic aware of the hundreds of thousands in New York alone with a strong affinity for the club who may not get up at 7am for all games but still like Celtic? I don't think so. Celtic give them no outlet whatsoever to express ANY kind of support other than "Sign up for Channel 67", are you kidding me?

It is hard enough to support Celtic in America, given the lack of access, ridiculous KO times and constant feeling of being used, without also knowing there are people in America, and Canada too for that matter, who could greatly enhance the club but are not given any opportunity to do so. Why aren't they? It could well be the old Celtic "If we dinnae control it, it disnae happen", a policy that has really come to the fore in the Lawwell era.