Lost without The Bhoys. 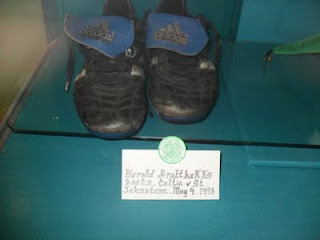 We are just over two weeks away, bizarrely, to the start of the season and it is a season that is as big as any for Celtic in the modern era, probably since we stopped 10 in a row. Dress it up any way you like, the last three years have been drenched in failure. If we had stumbled over the line in 2009, who knows where we would be now but we didn't and it was only from January this year did the first shoots of recovery start to become visible. Whilst the horrific campaign against Neil Lennon, coupled with some extraordinary bias against us, made it almost impossible for us to win the league, on the park what snookered us was December and the run of form then. I don't know what it is about Celtic and December buy we seem to put in some horrific performances in that month. In 2008, we won at Ibrox then but also drew with Hearts at Celtic Park(the game before the McGeady-Strachan bust up) in one of the worsr performances ever seen.

Fast forward a year and a shocking 2-1 loss at Tynecastle made it virtually impossible for us to win the league and it wasn't even Christmas. Then last season, three home draws in a row, two of which saw leads thrown away at the death, saw us drop the six points that we should have got and put a fairer reflection on last season.

A lot of people have every right to be worried at Celtic right now. There is no doubt that Neil Lennon did bring back the thunder last season and we should have won the treble but we didn't and no signings have the fans excited at the minute. There is also the fact that it was amongst the stupidest decisions ever made by Celtic to send the players to Australia for pre-season. The incessant lust for money at Celtic clouds every decision and karma may well bite them on the arse with the cancellation of Saturday's game in Perth.  Fans now won't be led down the garden path and, if you're a diehard, a new friendly popping up every day is an absolute farce for fans who only want to see their team but get precious little notice to book travel and accom, due to the complete lack of basic organisation by Celtic.

Speaking of which, in North America, no one is quite sure whether games will be seen in clubs next season as it looks like Premium Sports have shot the craw and Channel 67 will take over. There are issues surrounding that of great concern and they are summed up perfectly on Podcast 106 by The LostBhoys. Hearing them gives me hope, I really want Celtic to provide some too.
Posted by Paul Larkin at 7:36 AM