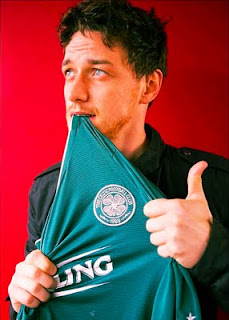 I watched an interview with Noel Gallagher yesterday and as well as being very sharp and very funny, he knows his football. Noel is a big Celtic fan and has been to watch us numerous times and never hides his alliegance to us. Rod Stewart is a one man PR machine for Celtic and talks with a knowledge and understanding of Celtic constantly. I also know for a fact that he gets weekly updates of all goings on at Celtic from the inner sanctum. Billy Connolly made one of the best speeches ever at Celtic in 2006 after we won the league against Hibs where he not only talked about all the greats he'd seen at Celtic Park but also talked about how he was sick of being tagged beside the huns. James McAvoy(pictured) is another proper fan who sees a lot of games in America and is updated by text by pals when he can't. John Higgins is a diehard Tim, very approachable, most people who have watched Celtic in the last 15 years will have seen him somewhere in amongst the diehards or singing along with the rest of us.

I use these examples because I know, no matter what, they will always support Celtic. The reason I bring this up it occured to me yesterday how many folk attached themselves to Celtic in 2003 that you never hear about now? I'm talking about people like Westlife. How many games were they going to private jet too? Did they ever actually make any of them? Travis, I remember Fran Healy waxing lyrical in that season a lot, last heard of in Berlin I don't recall him dodging the rain to get into any games recently? Darren Gough, who sat in front of me in the 2-0 win at Anfield in a Celtic scarf and now claims to be a hun on Talksport!

Not really got a point here, just a weekend ramble.
Posted by Paul Larkin at 3:22 PM