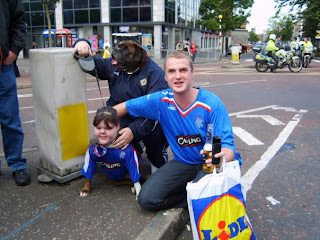 Yet another campaign from the demented minds of Follow Follow ends with them all looking like bigots. Come to think of it, it started like that as well. After one bigot made up stuff about his wife being a lip-reader and that Neil Lennon had racially abused The Sewer Rat, they went into overdrive, the usual suspects, we all know who they are, and before you could say "Vile Hun", the police were inundated with complaints of a hate crime against The Sewer Rat. All was going swimmingly, the likes of Graham Speirs were happy to go along with it on Twitter(that not a hate crime right there?),  until two things happened that they just never saw coming, can't blame them for that given the blinkers they wear. The first was Paul McBride QC promised to go after the people behind this campign to demonise Neil Lennon, squeaky bum time for Big Mark and Wee Sandy. Then, just as they were flushing again, The Sewer Rat admitted he wasn't racially abused. Oh dear, how to end a campaign eh?

Now, we are all used to the sick minds of Follow Follow, there's no surprise there. The recent new feature has been Graham Speirs return to the dark side. See Old Speirsy, we thought, was on a moral crusade to to rid the huns of their bigotry. Or so we thought. The reality was different, he's fallen out with his hero David Murray, he could no longer be trusted to be a Lapdog so poor Graham was cast aside, sniggered at by new pups Jackson and Leckie. He didn't take this lying down, like he used to, he wrote a book, dressed up as a study of Paul Le Guen, but in reality just a load of shots at Murray. Oh gosh Graham. Once Murray himself was cast aside by Donald Muir, Martin Bain had an idea from his sunbed, let's get Graham back onside. So he went to see Walter Myth and told him "Hey Dad, you're doing a book aren't you?, why not get Big Graham to do it, he's really one of us you know", So Mr Myth said "Yes son" and the die was cast.

Graham then remembered what he is, a diehard hun, and set about appeasing the mass hordes of non-humanity by talking non-stop bollocks about Neil Lennon, safe in the knowledge that his chum Walter would sail off into the sunset, Treble secured, and Graham would be back in the bosom of his brethren.

Well guess what Mark, Sandy, Martin, Walter and Graham? You fucked that one right up.
Posted by Paul Larkin at 7:03 AM