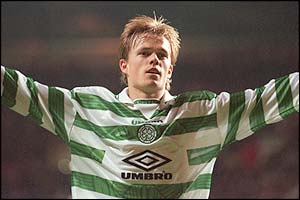 How did your move from Queens Park to Celtic come about?
The move to Celtic came about after some rumours they'd been watching me for QPFC. I think they'd asked Eddie Hunter ,the Queens Park manager at time, if he'd recommend anyone for an U19 tournament in Geneva and he put me forward,of which I'm eternally grateful. I remember training with Celtic in the week leading up to the tournament and scoring a hat-trick at Helenvale in a friendly. Liam Brady was at this game and looking back on it I feel this swung my move even before I travelled to Geneva with the team!!!I went on to sign shortly after.
Lou Macari compared you to Kenny Dalglish after your debut, was that a help or a hindrance?
My honest answer to this is it didnt affect me at all. I'd grew up a huge fan of "The King" thanks to my Dad, the fact that I'd just made it into the first team at the time was the best experience I'd had in the game so far and just found the headlines a bit embarrassing! It was a story for the papers at the time but I'm still grateful to Lou for giving me my debut!!
You joined Celtic at quite a tumultuous time in the club’s history, can you give us an insight to what it was like at the time?
Although it wasn't the best part of Celtic's history when I signed, this was still Celtic!! And for a boy growing up wanting to play football it didnt come better than this!!I always like to think Id have had the ability to break through regardless but these times ensured Celtic had to use youth and bring players through, I got my chance at this time and wasnt going to waste it!
You really started to blossom at Celtic under Tommy Burns, was he a major influence on your career?
Tommy Burns and Billy Stark were major factors in my development as a player, they were great coaches but also father figures to a few of us that came through then. I never got the chance to ask Tommy what he saw in me to suggest I came from being a forward to also playing deeper on the right side of midfield but it definately developed my game play and understanding of different positions. It's one of my biggest regrets in football that TB's team never won the title, I enjoyed playing in that team, unfortunately I think we were up against Rangers best ever at the time.
You’re well known for having a great relationship on and off the park with Jackie McNamara, did you both just “click” right away?
Yeah Jake and I clicked from the start, we'd met on U21 duty beforehand but it was when he signed for Celtic we really became mates, we were the same age roughly and had the same things in common. Add to that that we played beside each other on a Saturday so we got to know each other very quickly, it's a friendship that has lasted till now and both families are very close.
Tommy Burns leaves, Wim Jansen comes in, we stop 10 in a row, can you put into words what that season was like as a Celtic player?
Wim arrived and at the time the players never really knew him, we went on to find out he'd been a major player for Holland at two world cups and a respected World coach, he was much more calm in everything he did than Tommy, he'd came from outside the Celtic background and liked to approach everything a little different.There was no loss of temper after games with Wim he'd prefer to let the dust settle and approach things on a Monday morning when all the heat had went out of any situation. I personally liked him and his training, typical Dutch all with the ball, in many ways like TB but he had his own little touches which brought something new to training.
East End Park, May 98, what was said in the dressing room after it?
I cant honestly remember what was said after this game, we were all numb in disbelief, I remember phoning Jackie the day before when Killie had scored at Ibrox, we were all set for picking up the title on the Sunday, I think the fans were as well,we just couldnt believe how it panned out, I was gutted personally as for a while it had looked like my goal was going to be enough. It just added to the enormous pressure that was building for the following weekend!!


Can you put into words what it was like as a player the day we stopped 10 in a row?
I'll try,.....relief was the main feeling at the time. As a player you get caught up in the whole event but at least you have the power to change things,what I mean is when I came off in the 2nd half of this game its the most nervewracking experience Ive had in my career!! This was probably what the fans were going through, I just remember Harald scoring and I jumped on John Clark, this was the first time I relaxed, the whole occasion was amazing but its only nowadays I appreciate how big a day it was!!
France 98, you're in the squad but don't play, still a good experience?
France 98 on the back of winning the title was another highlight in my career. We'd seven Celtic players in the squad I think and we were enjoying the occasion together. I'm obviously disappointed not to have actually taken part in a game but the whole experience, the build up in the States, right through to walking out in the Stade de France in kilts for the first game, these are moments you'll always have and make all the hard work getting there worthwhile!!
You left Celtic in 1999, along with Phil O’Donnell, for Sheffield Wednesday, was it the right time to go?
I think at the time it was right for me to move, Sheff Wed were in the Premiership at the time and I was 24, I'd been in Celtic's first team for 5 years,as much as I'd say my time at Celtic has been by far the best in my career it was maybe my only chance at a crack in England. It never worked out for me or Phil down South football wise but I did enjoy my time in Sheffield, it was a new experience after the "Glasgow fishbowl" and we did meet some great people and have good times there, my first son was even born there!!
Phil O’Donnell was obviously a great friend of yours, can you tell us a bit about the “Walk 10 for 10”?
Yeah Phil was a great friend and sorely missed.The Walk 10 for 10 basically came about after talking with his wife Eileen about doing something on the day of Phil's passing. I know she and the kids find this a real help on this day to do something positive and raise a few quid for BHF and Mary's Meals at the same time. We've done two now walking from Fir Park to Celtic Park and both times the turnout was brilliant, we hope to keep it going!! This year we are also doing a trek up five volcanoes in Ecuador in memory of Phil and this too is to try and reach a 100k total for the British Heart Foundation, if interested we have a site www.tributetophil.com where you can see exactly what were doing and if anyone wants to support us there's a justgiving facility there, any support at all would be hugely appreciated!!
Ever had any strange request from fans?
No not really but it still amazes me that you can be in the most remote place in the world and a Celtic fan will approach for a photo or autograph!! A few years back I was visiting my sister and brother in law in Ottawa Canada, my brother in law, a Celtic diehard, had mentioned this to a friend in a supporters club there and they invited me as guest of honour for an evening, they even had a guy pipe me in!! We had a great night and they really looked after us, this was after I'd been away from Celtic five years!! It just highlights the support the club has!
Finally Sid, ever see yourself as a manager?
I never say never but at the moment I feel I'd be more suited to coaching with younger players or maybe alongside someone, I've done part of my coaching badges but still have a bit to go.Who knows what the future holds!!!
Posted by Paul Larkin at 3:43 PM