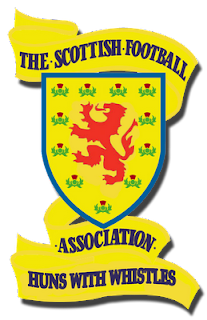 Where better to end our feature than with the organisation that employs all these clowns? From trying to shut us down for flying a flag, to deliberately stopping us playing good players v the huns, the SFA has been Anti-Celtic since our inception.

There's been a lot of stuff written this week, here are some things to highlight what we mean-

Here is a recent video, this sums up how bad it now is in Scotland-
http://www.youtube.com/watch?v=yS3fXhr7Lwk

Remember Andrew Waddell allowing the huns to KO at Celtic Park in March 1993 after we had 8 players in the hun half celebrating?

Remember Joe Jordan winning a coin toss for home advantage in a League Cup Semi only to be told that was just to see who would call?

Remember Gordon McBride chopping off a legitimate Cadete goal at Ibrox then 5 years later his brother doing the same to Hartson?

Remember not getting a penalty for an entire year in the early 90s?

Remember Jim McGilvary sending off Rod McDonald for blessing himself but refusing to send Gazza off for headbutting in the same game?

Remember the SFA charging us £1m to rent Hampden then refusing us the right to fly the Irish flag?
The point we have tried to make all week is that you don't need a grand conspiracy in Scotland, it's in them already, no one needs to tell these people to hinder Celtic, it's in their instinct, it's who they are.

It is fitting today that Celtic have waged all out war on the SFA, it's long overdue. The fans deserve it, after all it's us who have suffered.

Celtic have won 42 leagues in Scotland, should be at least 60. You know it and we know it.

Here's a footnote, remember Gretna? They played at Fir Park and when we played them there, they charged us £25 to get in. What did they charge the huns? £18. See, it never dies, it just takes new forms.
Posted by Paul Larkin at 4:19 PM