Has Lawwell hung us out to dry again? 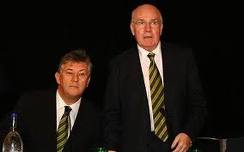 I know quite a few Tims out there thought Celtic were playing this cute wee game, say nothing, let the SFA hang themselves. WRONG. I know quite a few Tims thought "Bulldog" John Reid was going to tear everyone at the SFA limb from limb and avenge the cheating we have had to put up with. WRONG. Has the penny dropped yet? Self interest is the only thing these people are interested in. They don't care whether not you spend all your disposable income to watch Celtic being cheated week in, week out, they just want you to keep spending. Celtic's best case scenario here is for the SFA to bullet Dallas and McDonald without us. never going to happen. It's up to us, once again, to sort this out, below is the beginning:

Craven also revealed details of the post match conversation between the match referee, Dougie McDonald, and Neil Lennon regarding the penalty incident. He stated, “We told him the version that was a lie.” This is a direct quote from an S.F.A. match official admitting that they lied to our manager about a refereeing decision. This, once and for all, proves that corruption does exist in some form within the S.F.A.

We believe that, just as Hugh Dallas attempted to make Steven Craven a ‘scapegoat’, so the S.F.A will now attempt to do the same to him and Dougie McDonald, in order to ensure that the whole incident can be ‘swept under the carpet.’ This cannot be allowed to happen.

The purpose of the planned protest is to highlight this on-going situation. We demand that an independent investigation is carried out into refereeing in Scottish football. We must do everything in our power to ensure that the S.F.A. becomes a more transparent and accountable organisation, responsive to clubs and fans. Decisions like those taking place in the last few weeks should not be allowed to happen or be covered-up in future.

We are under no illusions about the chances of suddenly having our demands met by protesting at Hampden Park. The thing the S.F.A. hates the most, however, is adverse publicity. They, along with some of their friends in the Scottish media, are active in making sure that some damaging articles never see the light of day. If we, the Celtic support, turn up en masse, the media cannot ignore this. An e-mail will be sent to every newspaper and television programme that covers football within the UK and Ireland to inform them of our proposal.

After the protest has finished, we hope that as many of you as possible will march together with us from Hampden to Celtic Park. Bring whistles, bring banners and most importantly, bring your mates! It is time to show the S.F.A. that we are behind our club and will not let them get away with this.
Posted by Paul Larkin at 5:28 AM