Has anyone called Jim Gannon to apologise? 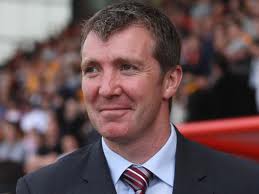 Hugh Dallas should be used to this. It's not the first time he's been accused of bias, incompetence and general stupidity. Less than a year ago Jim Gannon was sacked by Motherwell for refusing to cow-tow to authority and for calling into question Hugh Dallas integrity.


Indeed, such was the level of vitriol Gannon faced at the time, Motherwell's greatest fan Tam Cowan berated him on air, but not to his face of course for "Daring to question the integrity of a man like Hugh Dallas"  Who, if anyone, will call to apologise to Jim Gannon? I won't hold my breath. Celtic supporters owe Jim Gannon a debt for having the balls to speak out against the corrupt Scottish game. Who at Celtic will do the same?
Posted by Paul Larkin at 1:28 PM