A day in the life of Peter Lawwell 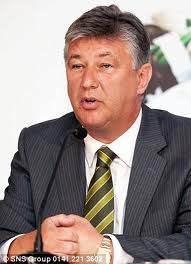 A question that comes up more and more(especially when Celtic's accounts come out!) is what does Peter Lawwell actually do? Of course we know he is our guy when it comes to transfer dealings, the hiring and firing asepct but when the transfer window is shut, what does a day in the life of Peter Lawwell consist of? Honestly, there is no joke coming!

After arriving in the morning, the first thing that would be addressed are the newspapers, with a sitdown in his office with Celtic's PR staff where responses and statements would be discussed.

Then he would go through his correspondence, mostly supporter letters and emails, as given to him by his secretary.

There would be chats with each business manager, tickets, merchandise, hospitality and so on, basic briefings and outstanding issues resolved. This would occasionally be collectively with a business strategy meeting.

On certain days there would then be a meeting with the manager to discuss all aspects of the playing side of the club.

At this point there may be offsite meetings, sponsors, SPL and SFA, and so on.

There could be a supporter meeting but these have lessened in the last two years.

Then quite often there will be a press meeting, often with just one journalist where certain relevant news aspects would be discussed.

After that there could be commercial proposals, where people from outside the club would pitch an idea.

Quite often there will be meetings with the Stadium Safety Team to discuss relevant issues.

There will be constant interaction with the financial team and constant correspondence with Eric Riley.

If there are legal issues to discuss, the club lawyer will come in for a meeting.

Throughout the day there will be a steady stream of calls from agents to discuss transfers and contracts.

Finally, and perhaps most importantly, there would be the daily calls to Dermot Desmond and Tom Allison to discuss what happened at all of the above.

So there you have it folks, a day in the life of Peter Lawwell.
Posted by Paul Larkin at 5:14 AM