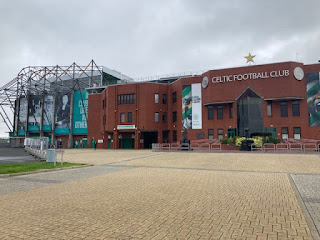 I went to Celtic Park today. That's strange for me as I hate going to Celtic Park when there isn't a game on. There's an eerie feeling about the place when there's nothing going on and walks from the station or city centre seem a lot longer when there aren't thousands of your own around you. Today was even stranger as most of the thoroughfares were blocked off and the only real places you could go were the Celtic Way and the new fangled Celtic Shop (which is exactly the same as the old one except Adidas is all over it) which made my trip pretty pointless in all honesty and I feel pretty deflated about it now. Thinking about it made me feel incredibly sad that football is going on without the fans and there doesn't seem to be any real impetus to have us back. I know Celtic want us back and I'm sure that would be the same for all clubs but, frankly, the media seem to be loving the fact that they get full access and can still do their jobs without those pesky fans bothering them./

When I look around the place, online and off, I see many folk who simply don't understand Covid-19 or the things we must to do to try and defeat it. The latest "I AM A MORON" Bat signal is those who refuse to wear a mask or plaster the internet with conspiracy theories about the disease. I've even had people say to me that it's a hoax because they don't know anyone who has had it. I do. 17 people just now. Five of them died over one horrible weekend. I can safely say that, after witnessing these events, if someone came up to me and said it was "FAKE NEWS!" I'd have smacked them in the fucking mooth.

I miss being around Celtic folk. Personally, since March, I've been to two pubs and one cafe,  that's it. Don't get me wrong, I'd love nothing more than to be in amongst it but that's just not possible just now and folk need to realise that. 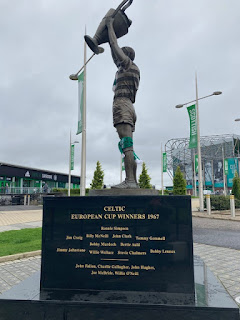 Whilst I was walking about Celtic Park, I started thinking about all the times I've came out grounds and said "Never mind the game, what about the fans" That's what makes Celtic special, the fans. There hasn't been a player yet better than the fans (Although Danny McGrain comes damn close) and I could tell stories all night about occasions I had, even in adversity, when being among Celtic fans made me feel 10 foot tall.

I can remember packing out grounds all over England and feeling like it was a celebration of Celtic and it's support. God I miss those days. Away early, all your mates, tanked up by 10.30am, invading a new city without a care in the world. This was before football became so corporate and cynical. And they needed us then (or at least that's what they told us)

Despite rumours to the contrary, Celtic isn't an easy club to follow. It costs a fortune, there's never enough tickets and you get treated like shit all over Scotland. Similarly, it's a hard club to defend when it increases the price of season tickets when no one can get in and creates a rabbit hole akin to Wonderland in order for fans to get a refund for games they didn't get last season.

Yet I still love it and all of you as well 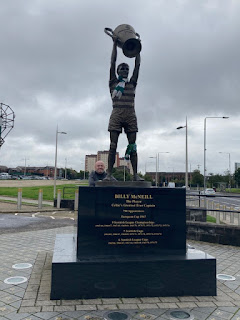 Posted by Paul Larkin at 7:19 AM No comments: