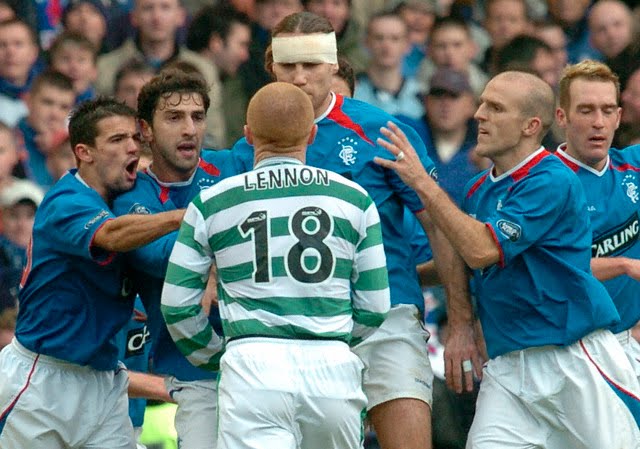 Nostalgia can be a good or bad thing. Recently, STV have been plugging old episodes of Take The High Road. People in their 40's and over will remember all the characters and think back to a time when it was on and get a wee glow inside them. Right up until they watch it again.

I read today, admittedly from not anyone who knows about Celtic, saying that Neil Lennon should not be criticised because of the stuff he has gone through to be Celtic manager. Sorry, but that's bollocks. Lenny would not be the kind of man he is if he ran away at the first sign of criticism.

And he does deserve criticism.

His whole demeanour this season is of a man who is fed up. I think I know a couple of the reasons why. Firstly, Gavin Strachan was not his pick as part of his management team. Lenny approached the board and asked for Tommy Johnson but was vetoed. This came after Damien Duff had abruptly left of course. The usual family reasons were trotted out which is fine but doesn't explain John Kennedy lobbying to get the Dundee Utd job when it was available.

The reality is though Neil Lennon can't really complain about any of this as he knew what he was getting into when he took the job and things reverted to the old way of things (Peter Lawwell doing everything bar picking the team and challenging decades of cheating) that had been banished under Brendan Rodgers.

Speaking of Rodgers, however you feel about him, it cannot be denied that he brought a level of professionalism to Celtic that enabled us to absolutely steamroller the league. I don't really know if this has been maintained under Lennon but his barb last night about players not wanting to be at Celtic doesn't exactly paint a good picture right now.

When I saw his team last night, I text a couple of friends saying "Cluj Mark 2" because whatever  anyone says, it was unfathomable picking that team and those tactics last night. (Something the manager himself admitted post-match)

Where do we go from here?

I still think we are more than capable of winning the league but it has been said ad nauseum, the biggest threat to 10 in a row is ourselves.

As usual, our forays into the transfer market have been pretty bizarre. We have had Klimala since January yet the manager tells us he's not match fit, why?

There's also the Leigh Griffiths situation. We were told he came back overweight, why? Surely the club were monitoring all the players in lockdown?

It all feels a bit disjointed just now and, in this season of all seasons, that should not be happening.

I don't know much but one thing I do know is if this continues, we will all be taking the high road.