From Albert With Love review-From a Jambo 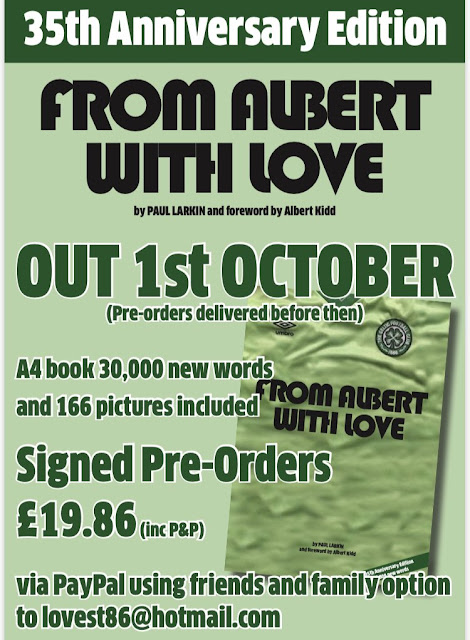 "As a Hearts fan, this is exactly the type of book I’d ordinarily avoid.  A story of the 86 season, culminating in Hearts chucking the league and Celtic pipping us to the post in heart breaking fashion.  And to be honest, I am in under no illusion that most Hearts fans would never even contemplate reading it, in fact I wouldn’t either if the author wasn’t a personal friend.  However, for that reason I did read it, and in doing so I was hit a great wave of nostalgia and a good insight into being a football fan in the 80’s.

As much as the book is a bit of a love letter from Paul to Celtic and Albert Kidd in particular, it’s also a look back at an era of football that’s gone forever.  Travelling to games home and away by hook or crook (and being able to remember your whole supporters bus over 30 years later). Scotland actually being not bad and standing on the terraces, or outside the boozer waiting on the adults with your bottle of coke, is a warm reminder of a time when football never cost an arm and a leg.  It was an era I missed as a fan, when I started going it was coming up to the introduction of all seater stadia which has led to a bit of a sanitisation of the game, and reading this makes me feel like I missed out.

It's also feels a bit more than just a football book, it's a throwback to growing up in the 80's in general and remembering all the characters from your childhood including the “famous” footballers from your area, and I'm sure a lot will resonate with people who grew up in a certain type of environment. I think it also illuminates the difference between now and then.  These days people will happily use social media to dehumanise whole sets of supporters and give the impression that they’d never even entertain hanging about with them.  But Paul’s stories of growing up with guys that were supporters of other clubs and they were in fact, just your mates, regardless if you followed the same team or not.  It is a good reminder that you don’t always have to show how much you dislike others to have your opinion taken seriously.

I know it’s probably just through nostalgia tinted glasses, but Paul makes this season feel like a simpler time.  He tells a story about getting a radio cassette recorder for his Christmas which he used to get his mum to tape commentary from games he was attending.  The innocence of childhood where you’d happily relive run of the mill games over and again because it was your passion, it genuinely reminded me of how much football used to consume everything I done as a kid.

In terms of reading this through the eyes of a Hearts fan it’s quite difficult so many happy memories from people around a subject you are so used to hearing horror stories about.  No matter your age the spectre of 86 looms large over Hearts fans, even for me growing up I was too young to grasp what it meant, but until we won the cup in 98 it was always levelled at us as a reminder we’d not won anything for decades and bottled the big chance we had.

However, Paul’s done a great job though of while being clearly for Celtic fans, he’s included a lot of well researched information about Hearts and other clubs.  It's also good to see references that most Jambos would be familiar with including a warm look at the infamous China, “King of the Hearts supporters”.

What really gives the book a good insight to the season is that it’s not just Paul’s stories which are enjoyable and relatable, which they genuinely are including a startling revelation for anyone that knows him about his time on the stage. It’s that it contains a collection of views, mainly from Celtic fans, but also nuggets from Hearts, Hibs and Dundee United supporters which helps give a more rounded view of how the season unfolded.

The biggest compliment I can give the book is it’s an easy read.   I know that could be taken negatively, but it’s not intended to suggest there’s a lack of substance.  It was an easy read because of how well it flows. A review of a season always carries the danger of feeling formulaic, but I think this book speaks to Paul’s story telling style that each tale is woven into the recollections of games humorously and seamlessly.  The way he writes is almost like an internal monologue, it feels like you’re listening to him in the pub when he explains to the reader how he preferred Mark McGhee to Mo Johnston which wasn’t the popular opinion at the time, but obviously would be in the years that followed. Or how he resented Hearts fans for coming out of the woodwork when riding high.

Obviously this will appeal mainly to Celtic fans, but it’s a great read, and most importantly a fun look back on the game for anyone who wants to remember, or get a taste for, the joys of being a Football fan in the 80’s" 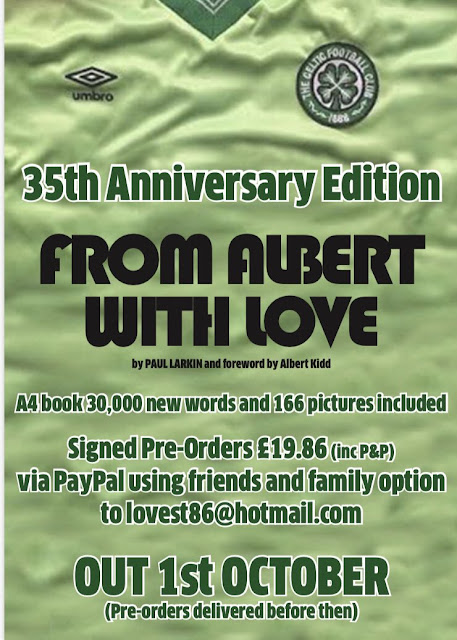