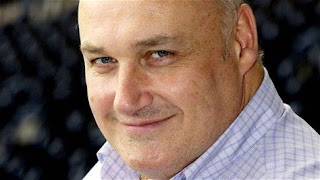 It came as no great shock to anyone not hard of thinking that the "Morelos Attempted Murder" story was exposed as unadulterated pish. In a country that didn't take seriously the actual attempted murder of a football manager, you're not going to pull the wool (or the car) over the eyes of anyone who doesn't want it. When it transpired that it was actually a private investigator hired by Morelos wife to catch him cheating most folk thought "Can there actually be two women that daft?" I personally couldn't give a toss if he is playing with the entire Scottish ladies fitba tesm but I am concerned that Jim Traynor still has an iron grip on a lot of journalists in Scotland.

This is a man who became Director of Communications at Sevco, got sacked with a healthy pay off, and now works freelance at Ibrox doing the communications. Not a bad gig if you can get it (C.V. requires a list of where the bodies are buried) Now his evil ways are going into overdrive to brush away any and all pressure from Slippy G and his aversion to winning league titles.

When that squirrel didn't work, the next dark art from Traynor was to set up a rare interview with Morelos and then get his pals in the press to use it as an attack on Celtic supporters. That also came as no surprise to any of us.

This is exactly a time when strong leadership from Celtic is required but posted missing again. You won't get any member of staff saying anything so bad is their fear of Lawwell that it edges closer and closer to being complicit as any criticism of leadership in there, or lack there of, sees a threat to all their freebie trips and pension plans.

Who suffers from that? Just us, the supporters, nobody important.

What should happen now is an expose of Jim Traynor and blowing the whistle on all his shenanigans but that requires brass balls and the only set I see in Scotland are the ones hanging from Morelos probable next destination.
Posted by Paul Larkin at 3:19 AM