Peter Lawwell and The SFA 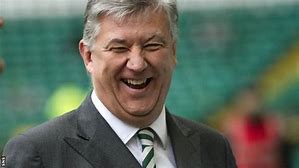 Regular readers of this blog know how it works. You give any entity from Ibrox an inch and they take a million miles. This time, last year Morelos was able to stamp all over our players, the referee does nothing and then enjoys a pint among his own afterwards.

Fast forward a year and another Sevco win and it's an onslaught on Celtic as Peter Lawwell does his usual, phone a few folk, drip feed a couple of token quotes and sit back hiding behind his secretary.

In 2012, we should have dismantled the SFA. One thing I consistently said on tour was that the SFA knew about the huns cheating way before anyone else did and did nothing about it. When the taxman  got wind of it, the SFA told the huns they needed to comply with a full investigation. The huns, rightly in my view, said back "But we kept you informed the whole time?". When it reached crisis level at the SFA and the, then, SPL, Celtic, Peter Lawwell and Eric Riley, were deliberately kept in the dark as other clubs deliberated what they should do.

I said the above to Peter Lawwell, that being kept in the dark should have been the fuel we needed to raise the SFA to the ground and his answer was "we are working on that behind the scenes" His next card was to bring in the lawyer, from Harper MacLeod, who was dealing with it and a group of us were given the opportunity to question him. I've not named the lawyer because he may just have had a bad day but he was as inspiring and assuring as fire juggler with no hands.

I remember a feeling in my gut that day that if this the quality the SFA would have to face, they'd be safe for another 100 years.

Peter Lawwell then stepped down from all boards within the SFA and SPFL. He was questioned on this and his reply was "It frees me up to focus on things like this"  (the fightback against the cheating)

He was also, frequently, at pains to point out that on Dec 2nd, 2011, he wrote a letter to the SFA questioning Rangers (IL) right to a European Licence and Craig Whyte's ownership of Rangers (IL)

So at this point, now 2016, I, and others, were of a mindset of "Right, he's away from them, the metaphorical guns are being loaded" (or words to that effect, gies peace, it's new year)

Well, Peter, we are still waiting.

Yet we are still there now and the SFA, Sevco and all our enemies are rubbing their hands with glee right now.

And it could have been so different.
Posted by Paul Larkin at 3:27 AM