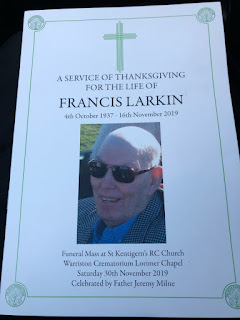 Why is it Celtic means so much to you? We all have our own stories and here's mine. Three men in my life gave me the gift of Celtic. My father, James Larkin, one of his best pals Archie Wright and my father's older brother, Francey Larkin.

When  I was told of Francey's passing, my head went into scrambled mode and it remains there still. It's hard to put into words just how big an impact Francey had, not just on me, but Celtic supporters in Edinburgh for the best part of 70 years. He started the first CSC in Edinburgh, along with his father, and acted as standard bearer to every Celtic supporter that encountered him.

Francey had the ability to sprinkle magic dust on me from a very young age. Every time I saw him, that brought me closer to Celtic and I loved that. From an early age, when my auld man couldn't go to the fitba, Francey picked up the slack. The slack being me.  For years I sat in the passenger seat of his van as we sloped through Edinburgh to go from my house in Pennywell to The Centurion in Corstorphine to get the bus to the game.

Francey never missed a game and that meant neither did I which in turn meant more stories than the bible. On the 19th of April, 1980 we were invited to a wedding. Celtic were playing Dundee at Dens Park that day and Francey hatched a plan to drive up after the ceremony, go to the game, then return for the reception. It would be cutting it fine but Francey was a great driver for a man with a glass eye. We missed Roy Aitken scoring after seven minutes but were delighted to get in just as the fans were in celebration mode.

Dundee then scored five without reply.

Let's just say we didn't enjoy the reception that much.

Francey had a big heart and one of a lion. His hands resembled two shovels and many people found to their cost that Francey wasn't the kind of man you messed with. He didn't so much ask you things more command them and one time he came up the bus and told me we were going to Ryries in Haymarket after the game. He had a night out in the town that night and needed to kill an hour. At this time there had been a lot of bus on bus violence between us and the huns. We sat in Ryries and I saw one of the main huns come into the pub, do a quick headcount of the Tims in there and go to the pub payphone. Francey spotted him and said "What's he daeing?" and I told him he was counting the Tims in the pub to probably tell his mates so they could then ambush us. At this point Francey walked over to the guy, still on the phone, and put five fingers up. The guy looked dumbfounded and said "Can I help you mate?" to which Francey replied "Count five for me son" and the guy replied "Why?" and Francey replied "Cause you'll need at least that to take me down" 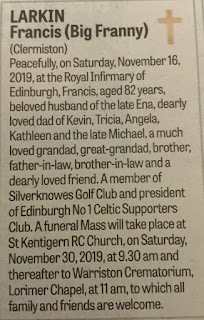 Francey epitomised everything I thought of as a Celtic supporter. He got respect everywhere and looked after me for years. Since he died, I've done a lot of thinking. I'm at a crossroads with Celtic right now. I love what Neil Lennon is doing with the team but I hate the way club did nothing about the cheating we suffered and the way they think they can play God with The Green Brigade.

I can't forgive that.

I also can't stand the amount of folk who work for Celtic and spend most of the time using the club to feather their own nests. That's a discussion for another day though.

I realised on Saturday, when we celebrated the life of Francey, that he, my auld man and Archie left us through the same place in Warriston Crematorium. I hope that means that they are all together now, having a pint, having a laugh and singing songs.

Francey's party piece was The Belfast Brigade. Every time we came back from Pittodrie he would be on the bus microphone belting it out.

So this one time he gets up and the whole bus is shouting "Here we go again, the Belfast Brigade"

Francey picks up the mic. stares us all down and starts...