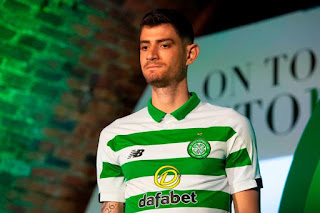 A word or two about Nir Bitton. Yesterday at Ibrox proved, once again, what a class act he is. It was clear from the get go that Sevco had identified him as a weak link hence picking Defoe and thinking he would run rings round him.

Which makes you think no one from Ibrox ever scouts Celtic.

The big man strolled through the game right up until a freak injury ended it. The telling part of that for me was the anguish on his face, You could see he felt he was letting his team down and that's how I want my players to feel.  Mane at Liverpool went berserk when subbed at Southampton on Saturday because Salah shot instead of passing. The faux outrage ensued with the point being missed, he cares.

So does Nir Bitton.

*You can watch a short interview I did right here about my forthcoming memoir TFOTB Interview
Posted by Paul Larkin at 2:17 AM