The Front of The Bus-A Memoir 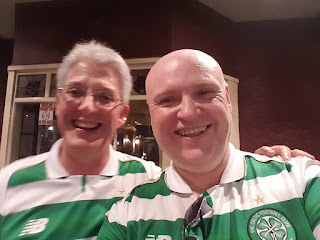 Well, I finally finished it. The book that was derailed by, first, mental health issues, and then a tsunami of hate that John Beaton kicked off on December 29th, is finally out my system. Coming in at around 208 pages, I've never been egotistical enough to think anyone wants to read much more of my shit than that. It's really the last time I'll put stuff that's all about me (although not all of the book is) in a book as I feel like I've done that now and with this I want a book that's fast paced, not wanting to be put down and able to be read in a couple of sittings.

With that in mind, I won't be flogging it to death. Once it's out, I'll be moving on and if it has a life after that, great, if not, well, you know the phrase by now "we move on"

It's essentially about the three books I did which became films and the background to all. About 95% of the stuff in it is stuff I've never spoken about publicly or put in print. It's not written in a style where, if you knew nothing about the subjects, you'd instantly know what was going on, no. This book is for the folk who help me and hate me.

Quite a few people in this time had digs at me, that I didn't respond to, and these are addressed in this. There's one or two folk who probably still think they are a friend of mine but, if they read this, they'll think again. It's a memoir as opposed to a story so this is my account of things taken from personal knowledge. I talk about technical things relating to cameras and mics and all that plus there's a chapter about HomeBhoys.

I do talk about a lot of the characters I met on my travels including Paul Kane (above), whose brother Martin inspired The Kano Foundation.

I write about meetings I had with Celtic regarding them taking action on all the cheating we suffered and give reasons why, I think, Celtic did SFA.

This was a cathartic thing for me. I needed to get a lot of it out for the sake of my own sanity. It won't trouble any of the book selling charts but if it makes the folk that supported me happy, then I'll be happy too.

Mainly though, I hope it's entertaining. We are besieged now with folk taking everything seriously and auditioning for a role in the MSM that they claim to hate. I'm old school so you won't get any of that shit in this book.

I want to thank those waiting on this book for their patience. I am now setting about another book that's way bigger and not about me at all, for what it's worth.

You can pre-order signed copies of The Front of The Bus from now via Paypal to lovest86@hotmail.com for £15 (Inc P&P)

Book on general release from November 1.

Finally,
Posted by Paul Larkin at 1:27 AM