Diminishing the importance of the Scottish Cup is like, for me, saying lunch isn't that important. With all the talk of managers new and old, Treble Trebles and Bus parades, it can be easy for folk to see the Scottish Cup as just another tick in a box.


The Cup was something that could salvage your season when I was growing up. It was as prestigious as the league and whole summers could be defined on the basis of 90 minutes (or 120 for that matter) I increasingly find myself looking back on the 80's as the last real golden period of Scottish football. I follow a plethora of accounts on Twitter that post old clips of Celtic games and find myself swimming under a waterfall of nostalgia after one click bursts the dam.

With that being said, I thought I'd indulge myself by writing about the five Scottish Cup finals I attended in the 1980's and see if I can awaken any kindred spirits (whom will probably have nodded off by now anyway) 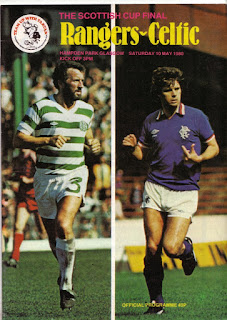 Celtic 1 Rangers (IL) 0 (AET), May 10, 1980.
This was my first ever Hun game. My Dad and Uncle, in their wisdom, thought it was time for me to go to one and what better way to get my first taste than in a cup final? I'd been to the semi-final and saw Bobby Lennox play and score in a 5-0 win against a Hibs team that contained George Best. For the final, we went in my Uncle's hatchback and I can vividly remember me on one side of the boot and my pal, Mark Henderson, on the other. At the old "Cutty Sark" bridge a bus full of Huns pulled up and were giving us dogs abuse. At this point, one of our number got out the car and attacked their bus with an axe. I was just coming up for six years of age. 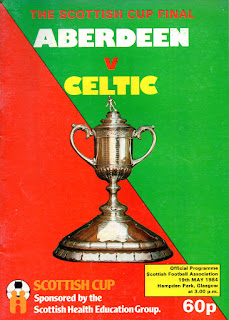 Aberdeen 2 Celtic 1 (AET), May 19, 1984.
Gordon Strachan, eh? He nipped at Bob Valentine so much that it prompted him to send off Roy Aitken and leave us really up against it having already gone a goal down. What happened after that was typical of Celtic at the time, we revelled in the adversity and played brilliantly, equalising with five minutes to go with a fantastic goal from Paul McStay. The big factor in the game was referee Bob Valentine who put in a grand masterful performance. After the game, Davie Hay and the Celtic board complained to the SFA. Davie Hay slaughtered SFA CEO Ernie Walker after the game proving that whilst we may have got beat, at least we had some balls then. 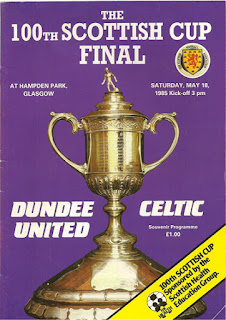 Celtic 2 Dundee Utd 1, May 18, 1985.
This was another one of those potential season-saving cup finals. Dundee Utd were a brilliant team at the time and we had an awful recent record against them. The writing seemed to be on the wall when Stuart Beedie put them 1-0 up in the second half such was their efficiency on the counter attack. Davie Hay then played a master stoke and made a few subs that enabled us to push Roy Aitken into midfield and enabled him to win the "Mr Superfit" MOTM award in the 100th Scottish Cup Final, He drove us on to equalise at a time when we still liked Davie Provan and then set up Frank McGarvey to win the cup for us with final ever touch in a Celtic jersey. 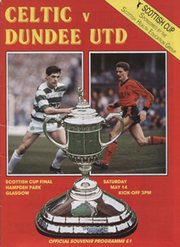 Celtic 2 Dundee Utd 1, May 14, 1988.
Bliss. The completion of a centenary double whilst at Hampden in the sun. There was an inevitability about this game. Dundee Utd were getting a reputation of being the perennial bridesmaids having in the previous season managed to lose to St Mirren and Gothenburg in finals despite having vastly a vastly superior team to both. Even when Kevin Gallagher scored (chased by Roy Aitken who has been booked a minute before and didn't want to touch him) you just had a feeling that day that we would win. And we did, 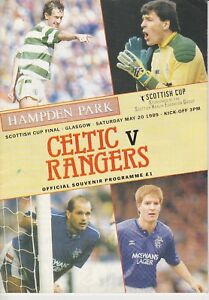 Celtic 1 Rangers 0, May 20, 1989.
Rangers just had to turn up and win the treble, right? Aye, right. Put simply, Super Joe Miller was on fire at the time as a centre forward, our defence had one of those rare days then when it was rock solid and we had been boosted by a certain "signing" but I'll leave that there. One of the best days of my life as it was one of those days that reminds you why you are a Celtic supporter.

I hope you all enjoy your cup final day, no matter where you are.

Posted by Paul Larkin at 9:33 AM No comments: 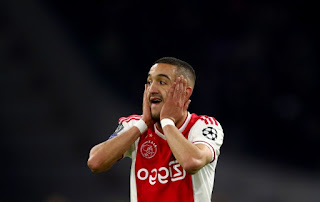 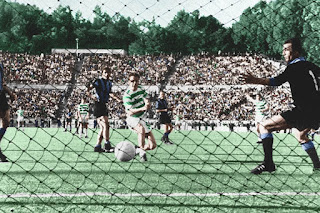