The first draft of the script will be finished on Thursday. After that, it will go to the director and executive producers who will have until May 1st to submit notes. The schedule has been stretched out as unforeseen things happened this year with me (a new barrage of threats and moving house, mainly) I've stepped back from all Social Media, bar Twitter, to focus fully on the script.

Unlike the previous three films, this is not a 10-15 grand documentary. This is a script for a feature film that we aim for a budget of around £100k to finance. As said previously, there are no deadlines to fulfil and that will allow us to explore all avenues of film finance except our traditional route of crowdfunding as that is not a route I am willing to go down for this film (if we cannot get the funding we need to make a film, I'd have no qualms whatsoever in turning it into a play)

I've spoken to and seen great actors and parts have been written with them in mind. That's exciting because you can play to their strengths of which there are several.

As for the film itself, it explores identity. Who we are and why we are. As both the writer and someone with a passionate belief in my identity in terms of the culture I come from, I feel this is an important time in history to reinforce that and show a wider audience why it is important to us and that we can never shy away from it.
Posted by Paul Larkin at 5:16 AM No comments:

Can you ever forgive me? 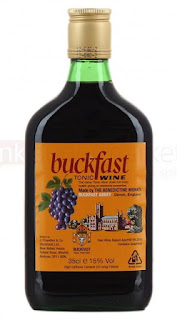 Richard Pryor once said "Forget about Racism, it's hard enough just being a person" Like you, and everyone else apart from the stewards and police, I saw the bottle of Buckfast thrown at Scott Sinclair on Saturday. It's not the first time I've seen a bottle of Buckfast thrown at a Celtic player never mind the coins, golf balls and various other items that seem to be the weapons of choice for the weapons just now. Getting back to Saturday, you know who I blame for it? Not Hibs, not the Hibs support and not even the authorities on double time. No, you know who I blame? The person who threw it.

You see, I believe in the mad, out there, theory that you take responsibility for your own actions. I know that's as whacky as the Twenty's Plenty argument for away fans but strap yourself in and take the ride with me whilst I explain what I mean before jumping out and having me reported to the thought police, k? K.

Scotland has a problem with hatred.

A certain type of hatred has existed, at least since the reformation. (the ideas for which started in the late fifteenth century) and there has been anti-Catholic bigotry in Scotland, in some shape or form, ever since. As people escaped the genocide in Ireland from the mid-1800's, a racism of being anti-Irish began weaving itself into Scottish society and is still prevalent in certain people today. Now, there's never been a better time to be an Irish Catholic in Scotland but that doesn't mean everything is ok now because it's not. None of these things have ever been properly addressed in Scotland and the fall out from that is that a lot of people still think it is ok to spout hatred against Irish Catholics. Similarly, some folk who are Irish Catholics (or just identify with that culture) use the same tactics to spit back at the folk who are spitting venom at them. (Neither is justified but if you had to justify one, I know which one I would. That's not to excuse it but I'm not going to bullshit you and sit here claiming I've never done that because I have, about the same amount of times I've drank Lager)

Stating all this, it bemuses me that the two targets in this debate always seem to be the same, Catholic schools in Scotland and football supporters in Scotland. First of all, as I alluded to earlier, it's very difficult to blame an entire collective of people for anything (Scour the internet long enough and you'll find folk trumpeting "Good" Nazis, a Traffic Warden they liked and even a call centre that answered on the first ring)

The Catholic schools argument always makes me laugh. Forgive me for making this analogy but it always reminds me of the Bill Hicks bit where he attacked the attackers of pornography by saying "There is sexual thought, therefore there are pornographic images, it's not the other way around" (Punch in Catholic schools and bigotry to there and you'll get what I mean)

As for football supporters? Most of the ones in Scotland are ordinary, every day folk. (That's a big reason why clueless snobs like Tom English will never understand football culture) Take Bradley Welsh, folk who know, know he was a big player in the football casual movement back in the day. He's the first to admit it. Now? He's a working class hero. Where would writing him off for life got us?

Speaking of Hibs again, a guy I've been friends with since primary age is a fanatical Hibs supporter. When I saw the bottle being thrown at Scott Sinclair, I'll let you into a little secret, I didn't blame him (I suppose I should have text him to double check it wasn't him but I'm going with the notion that he would never throw away drink)

Listen, I've seen the way it's been going with some fans (of Celtic, I can't comment on any other sets) and, in all honesty, some fans are behaving like fucking idiots (A subject I am an expert on, believe me) and the answer is, if they continue to behave like idiots, don't let those individuals go to the games. It's that simple and I say that knowing full well I behaved like an idiot a lot in my 20's.

There is an element of "I don't give a fuck" among some fans just now but you know what else is necessary? Making sure that those individual incidents aren't allowed to sweep over 500 years of enshrined hatred under the carpet