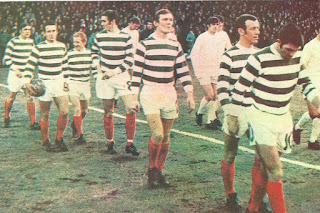 Since uploading Anyone but Celtic and Armageddon, the response has been phenomenal. Both have been watched over 3000 times since June 1st with The Asterisk Years gaining another 1100 viewers. You can get them here My next writing project is a passion project and, I can reveal here now, one of three that I will do in the next six years. It's called Jim The Tim, is a play and is based on a story involving my auld man that happened to him in the spring of 1970 in between a 0-0 draw at Tynecastle to clinch our second five in a row and winning 1-0 at Elland Road in the European Cup Semi-Final.

It's a story that has done the rounds among family for years and one that I searched out more about when Celtic went to Tynecastle in 2016 to clinch our third five in a row. I had thought about a novel or even a short film but I think a play format suits the story best.

So where we at? Well, I've already secured sounds effects people for the play, scenery builders, two great singers and am about a third of a way through the script. October, 2019 is pencilled in for the premiere. I'd like to have actors in place September of this year and the script done by Christmas.

This is a break from my usual stuff and something that may upset my pet abusers who love nothing more than to try to destroy everything I do because they display narratives they don't like. Well, don't worry people, the project after this will make your heads spin faster than Regan in The Exorcist.