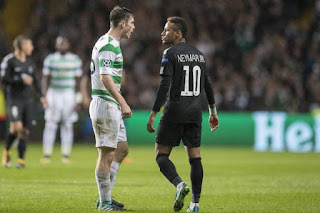 I'm old enough to remember and to have attended the Neuchatal Xamax games in 1991. Liam Brady decided, in his wisdom, to go with a back three in Switzerland that badly exposed a defence that was already shakier than a Frank De Boer coat peg and we were battered 5-1. European football was changing then. We just didn't know it. Most fans expected us to still turn the tie around at Celtic Park, despite a reduced capacity, and hope sprung eternal when we were awarded a first minute penalty. Charlie Nicholas sent the penalty sky high and brought us back down earth with a bang.

Last night was always coming. From 2001, when we first took part in the group stages of the Champions League, every year since the gap has got a little bigger. Barcelona in 2012 was probably our last strong punch in a tournament that now belongs Oil teams and Oligarchs. I was in Dubai in the summer of 2015 and saw first hand the wealth behind a lot of these teams. This isn't a different ball game, this is a different sport.

There was a clamour to buy a centre half before the deadline but in reality who would have made a difference last night? John Stones at 49m? Virgil Van Dijk at 80? This was a team that cost almost a billion euros to assemble. They are about join Barcelona, Real Madrid and Bayern Munich in the elite of world football. (Fucking incredible we get two of them in our group) And by elite, I mean they can and will leave everyone else eating their dust, including the chronically boring EPL.

We've have seen Celtic lose six and seven in Barcelona and now five last night to PSG. Whilst it still majorly hurts, there is really very little we can do about it as long as we play in Scotland. That's a reality that every supporter needs to get in check. I'm not advocating a move to the EPL, I'm not for that at all, just trying to meet the new boss, who may well be the same as the old boss, it's just now he  has Emirates or Qatar on his shirt.

I wouldn't want Celtic to sell out to the oil barons. I love our identity, I love our supporters (apart from maybe that one Bam last night) and I love that fact that we have guys like Tony Ralston coming through the ranks and already fighting for the jersey. I guess you could say I'm an idealist or a romantic (or maybe just plain daft) but I think games like last night are the price I need to pay to retain all that.

It was also still better than that night in Switzerland.
Posted by Paul Larkin at 5:47 AM